The Indus Valley civilization, one of the world's oldest, flourished during the 3rd and 2nd millennia B.C. and extended into northwestern India. Aryan tribes from the northwest infiltrated the Indian subcontinent about 1500 B.C.; their merger with the earlier Dravidian inhabitants created the classical Indian culture. The Maurya Empire of the 4th and 3rd centuries B.C. - which reached its zenith under ASHOKA - united much of South Asia. The Golden Age ushered in by the Gupta dynasty (4th to 6th centuries A.D.) saw a flowering of Indian science, art, and culture. Islam spread across the subcontinent over a period of 700 years. In the 10th and 11th centuries, Turks and Afghans invaded India and established the Delhi Sultanate. In the early 16th century, the Emperor BABUR established the Mughal Dynasty which ruled India for more than three centuries. European explorers began establishing footholds in India during the 16th century. By the 19th century, Great Britain had become the dominant political power on the subcontinent. The British Indian Army played a vital role in both World Wars. Years of nonviolent resistance to British rule, led by Mohandas GANDHI and Jawaharlal NEHRU, eventually resulted in Indian independence, which was granted in 1947. Large-scale communal violence took place before and after the subcontinent partition into two separate states - India and Pakistan. The neighboring nations have fought three wars since independence, the last of which was in 1971 and resulted in East Pakistan becoming the separate nation of Bangladesh. India's nuclear weapons tests in 1998 emboldened Pakistan to conduct its own tests that same year. In November 2008, terrorists originating from Pakistan conducted a series of coordinated attacks in Mumbai, India's financial capital. Despite pressing problems such as significant overpopulation, environmental degradation, extensive poverty, and widespread corruption, economic growth following the launch of economic reforms in 1991 and a massive youthful population are driving India's emergence as a regional and global power.

Southern Asia, bordering the Arabian Sea and the Bay of Bengal, between Burma and Pakistan

varies from tropical monsoon in south to temperate in north

upland plain (Deccan Plateau) in south, flat to rolling plain along the Ganges, deserts in west, Himalayas in north

Hindi 41%, Bengali 8.1%, Telugu 7.2%, Marathi 7%, Tamil 5.9%, Urdu 5%, Gujarati 4.5%, Kannada 3.7%, Malayalam 3.2%, Oriya 3.2%, Punjabi 2.8%, Assamese 1.3%, Maithili 1.2%, other 5.9%
note: English enjoys the status of subsidiary official language but is the most important language for national, political, and commercial communication; Hindi is the most widely spoken language and primary tongue of 41% of the people; there are 14 other official languages: Bengali, Telugu, Marathi, Tamil, Urdu, Gujarati, Malayalam, Kannada, Oriya, Punjabi, Assamese, Kashmiri, Sindhi, and Sanskrit; Hindustani is a popular variant of Hindi/Urdu spoken widely throughout northern India but is not an official language (2001 census) 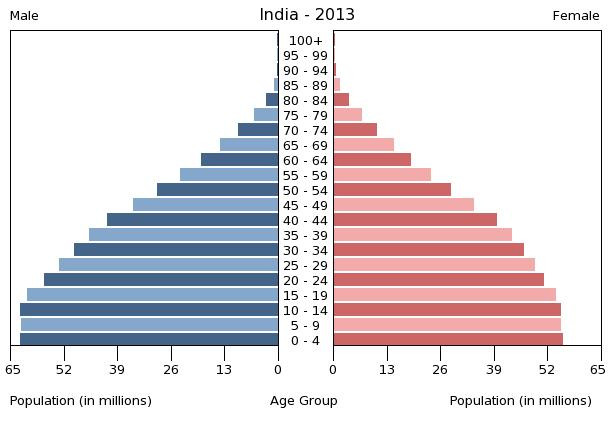 chief of state: President Pranab MUKHERJEE (since 22 July 2012); Vice President Mohammad Hamid ANSARI (since 11 August 2007)
head of government: Prime Minister Narendra MODI (since 26 May 2014)
cabinet: Union Council of Ministers appointed by the president on the recommendation of the prime minister
elections: president elected by an electoral college consisting of elected members of both houses of Parliament and the legislatures of the states for a five-year term (no term limits); election last held in July 2012 (next to be held in July 2017); vice president elected by both houses of Parliament for a five-year term; election last held in August 2012 (next to be held in August 2017); prime minister chosen by parliamentary members of the majority party following legislative elections
election results: Pranab MUKHERJEE elected president; percent of vote - Pranab MUKHERJEE 69.31%, Purno SANGMA - 30.69%

bicameral Parliament or Sansad consists of the Council of States or Rajya Sabha (a body consisting of 245 seats up to 12 of which are appointed by the president, the remainder chosen in staggered elections by the elected members of the state and territorial assemblies; members serve six-year terms) and the People's Assembly or Lok Sabha (545 seats; 543 members elected by popular vote, 2 appointed by the president; members serve five-year terms)
elections: People's Assembly - last held April-May 2014 in 9 phases; (next election must be held by May 2019)
election results: People's Assembly - percent of vote by party - NA, ; seats by party - BJP 282, INC 44, AIADMK 37, AITC 34, BJD 20, SS 18, TDP 16, TRS 11, CPI(M) 9, YSRC 9, LJP 6, NCP 6, SP 5, AAP 4, RJD 4, SAD 4, independents 3, other 31

three equal horizontal bands of saffron (subdued orange) (top), white, and green, with a blue chakra (24-spoked wheel) centered in the white band; saffron represents courage, sacrifice, and the spirit of renunciation; white signifies purity and truth; green stands for faith and fertility; the blue chakra symbolizes the wheel of life in movement and death in stagnation
note: similar to the flag of Niger, which has a small orange disk centered in the white band

the Lion Capital of Ashoka, which depicts four Asiatic lions standing back to back mounted on a circular abacus, is the official emblem; the Bengal tiger is the national animal; the lotus is the national flower

India is developing into an open-market economy, yet traces of its past autarkic policies remain. Economic liberalization measures, including industrial deregulation, privatization of state-owned enterprises, and reduced controls on foreign trade and investment, began in the early 1990s and served to accelerate the country's growth, which averaged under 7% per year from 1997 to 2011. India's diverse economy encompasses traditional village farming, modern agriculture, handicrafts, a wide range of modern industries, and a multitude of services. Slightly less than half of the work force is in agriculture, but, services are the major source of economic growth, accounting for nearly two-thirds of India's output with less than one-third of its labor force. India has capitalized on its large educated English-speaking population to become a major exporter of information technology services, business outsourcing services, and software workers. India's economic growth began slowing in 2011 because of a decline in investment, caused by high interest rates, rising inflation, and investor pessimism about the government's commitment to further economic reforms and about the global situation. In late 2012, the Indian Government announced additional reforms and deficit reduction measures, including allowing higher levels of foreign participation in direct investment in the economy. The outlook for India's long-term growth is moderately positive due to a young population and corresponding low dependency ratio, healthy savings and investment rates, and increasing integration into the global economy. However, India has many challenges that it has yet to fully address, including poverty, corruption, violence and discrimination against women and girls, an inefficient power generation and distribution system, ineffective enforcement of intellectual property rights, decades-long civil litigation dockets, inadequate transport and agricultural infrastructure, limited non-agricultural employment opportunities, high spending and poorly-targeted subsidies, inadequate availability of quality basic and higher education, and accommodating rural-to-urban migration. Growth in 2013 fell to a decade low, as India's economic leaders struggled to improve the country's wide fiscal and current account deficits. Rising macroeconomic imbalances in India and improving economic conditions in Western countries, led investors to shift capital away from India, prompting a sharp depreciation of the rupee. However, investors' perceptions of India improved in early 2014, due to a reduction of the current account deficit and expectations of post-election economic reform, resulting in a surge of inbound capital flows and stabilization of the rupee.

51.8% of GDP (2013 est.)
51.7% of GDP (2012 est.)
note: data cover central government debt, and exclude debt instruments issued (or owned) by government entities other than the treasury; the data include treasury debt held by foreign entities; the data exclude debt issued by subnational entities, as well as intra-governmental debt; intra-governmental debt consists of treasury borrowings from surpluses in the social funds, such as for retirement, medical care, and unemployment; debt instruments for the social funds are not sold at public auctions

general assessment: supported by recent deregulation and liberalization of telecommunications laws and policies, India has emerged as one of the fastest growing telecom markets in the world; total telephone subscribership base exceeded 900 million in 2011, an overall teledensity of roughly 75%, and subscribership is currently growing more than 20 million per month; urban teledensity now exceeds 100% and rural teledensity is steadily growing
domestic: mobile cellular service introduced in 1994 and organized nationwide into four metropolitan areas and 19 telecom circles each with multiple private service providers and one or more state-owned service providers; in recent years significant trunk capacity added in the form of fiber-optic cable and one of the world's largest domestic satellite systems, the Indian National Satellite system (INSAT), with 6 satellites supporting 33,000 very small aperture terminals (VSAT)
international: country code - 91; a number of major international submarine cable systems, including Sea-Me-We-3 with landing sites at Cochin and Mumbai (Bombay), Sea-Me-We-4 with a landing site at Chennai, Fiber-Optic Link Around the Globe (FLAG) with a landing site at Mumbai (Bombay), South Africa - Far East (SAFE) with a landing site at Cochin, the i2i cable network linking to Singapore with landing sites at Mumbai (Bombay) and Chennai (Madras), and Tata Indicom linking Singapore and Chennai (Madras), provide a significant increase in the bandwidth available for both voice and data traffic; satellite earth stations - 8 Intelsat (Indian Ocean) and 1 Inmarsat (Indian Ocean region); 9 gateway exchanges operating from Mumbai (Bombay), New Delhi, Kolkata (Calcutta), Chennai (Madras), Jalandhar, Kanpur, Gandhinagar, Hyderabad, and Ernakulam (2011)

Doordarshan, India's public TV network, operates about 20 national, regional, and local services; a large and increasing number of privately owned TV stations are distributed by cable and satellite service providers; by 2011, more than 100 million homes had access to cable and satellite TV offering more than 700 TV channels; government controls AM radio with All India Radio operating domestic and external networks; news broadcasts via radio are limited to the All India Radio Network; since 2000, privately-owned FM stations have been permitted and their numbers have increased rapidly (2007)

since China and India launched a security and foreign policy dialogue in 2005, consolidated discussions related to the dispute over most of their rugged, militarized boundary, regional nuclear proliferation, Indian claims that China transferred missiles to Pakistan, and other matters continue; Kashmir remains the site of the world's largest and most militarized territorial dispute with portions under the de facto administration of China (Aksai Chin), India (Jammu and Kashmir), and Pakistan (Azad Kashmir and Northern Areas); India and Pakistan resumed bilateral dialogue in February 2011 after a two-year hiatus, have maintained the 2003 cease-fire in Kashmir, and continue to have disputes over water sharing of the Indus River and its tributaries; UN Military Observer Group in India and Pakistan has maintained a small group of peacekeepers since 1949; India does not recognize Pakistan's ceding historic Kashmir lands to China in 1964; to defuse tensions and prepare for discussions on a maritime boundary, India and Pakistan seek technical resolution of the disputed boundary in Sir Creek estuary at the mouth of the Rann of Kutch in the Arabian Sea; Pakistani maps continue to show its Junagadh claim in Indian Gujarat State; Prime Minister Singh's September 2011 visit to Bangladesh resulted in the signing of a Protocol to the 1974 Land Boundary Agreement between India and Bangladesh, which had called for the settlement of longstanding boundary disputes over undemarcated areas and the exchange of territorial enclaves, but which had never been implemented; Bangladesh referred its maritime boundary claims with Burma and India to the International Tribunal on the Law of the Sea; Joint Border Committee with Nepal continues to examine contested boundary sections, including the 400 sq km dispute over the source of the Kalapani River; India maintains a strict border regime to keep out Maoist insurgents and control illegal cross-border activities from Nepal

world's largest producer of licit opium for the pharmaceutical trade, but an undetermined quantity of opium is diverted to illicit international drug markets; transit point for illicit narcotics produced in neighboring countries and throughout Southwest Asia; illicit producer of methaqualone; vulnerable to narcotics money laundering through the hawala system; licit ketamine and precursor production

These are the 50 largest cities of India ordered based on their number of inhabitants.