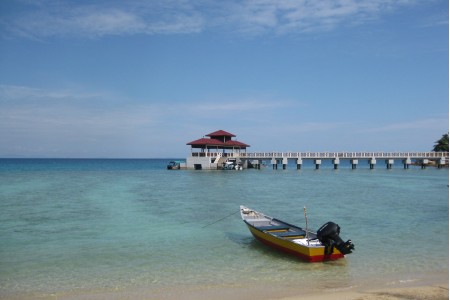 During the late 18th and 19th centuries, Great Britain established colonies and protectorates in the area of current Malaysia; these were occupied by Japan from 1942 to 1945. In 1948, the British-ruled territories on the Malay Peninsula except Singapore formed the Federation of Malaya, which became independent in 1957. Malaysia was formed in 1963 when the former British colonies of Singapore, as well as Sabah and Sarawak on the northern coast of Borneo, joined the Federation. The first several years of the country's independence were marred by a communist insurgency, Indonesian confrontation with Malaysia, Philippine claims to Sabah, and Singapore's withdrawal in 1965. During the 22-year term of Prime Minister MAHATHIR bin Mohamad (1981-2003), Malaysia was successful in diversifying its economy from dependence on exports of raw materials to the development of manufacturing, services, and tourism. Prime Minister Mohamed NAJIB bin Abdul Razak (in office since April 2009) has continued these pro-business policies and has introduced some civil reforms. 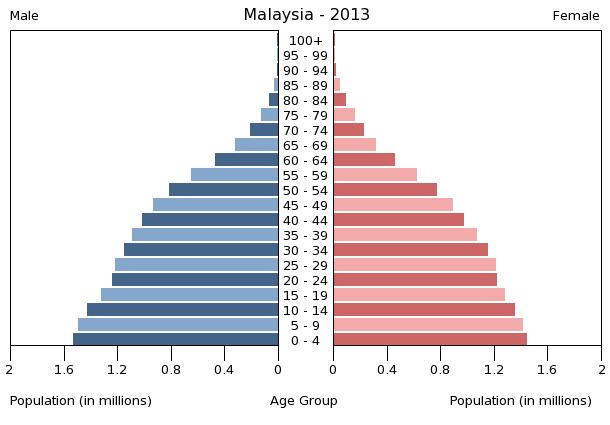 -0.34 migrant(s)/1,000 population
note: does not reflect net flow of an unknown number of illegal immigrants from other countries in the region (2014 est.)

constitutional monarchy
note: nominally headed by paramount ruler (commonly referred to as the king) and a bicameral Parliament consisting of a nonelected upper house and an elected lower house; all Peninsular Malaysian states have hereditary rulers (commonly referred to as sultans) except Melaka (Malacca) and Pulau Pinang (Penang); those two states along with Sabah and Sarawak in East Malaysia have governors appointed by government; powers of state governments are limited by federal constitution; under terms of federation, Sabah and Sarawak retain certain constitutional prerogatives (e.g., right to maintain their own immigration controls)

mixed legal system of English common law, Islamic law, and customary law; judicial review of legislative acts in the Supreme Court at request of supreme head of the federation

chief of state: King Tuanku ABDUL HALIM Mu'adzam Shah (selected on 13 December 2011; installed on 11 April 2012); the position of the king is primarily ceremonial
head of government: Prime Minister Mohamed NAJIB bin Abdul Najib Razak (since 3 April 2009); Deputy Prime Minister MUHYIDDIN bin Mohamed Yassin (since 9 April 2009)
cabinet: Cabinet appointed by the prime minister from among the members of Parliament with consent of the king
elections: kings are elected by and from the hereditary rulers of nine of the states for five-year terms; selection is based on the principle of rotation among rulers of states; elections were last held on 14 October 2011 (next to be held in 2016); prime ministers are designated from among the members of the House of Representatives; following legislative elections, the leader who commands the support of the majority of members in the House becomes prime minister (since independence this has been the leader of the UMNO party)
election results: Tuanku ABDUL HALIM Mu'adzam Shah elected king by fellow hereditary rulers of nine states; Mohamed NAJIB bin Abdul Najib Razak was sworn in as prime minister the day after his National Front (BN) coalition won a majority of seats during the 5 May 2013 national election; NAJIB was re-elected uncontested as UMNO president on 19 October 2013

14 equal horizontal stripes of red (top) alternating with white (bottom); there is a blue rectangle in the upper hoist-side corner bearing a yellow crescent and a yellow 14-pointed star; the flag is often referred to as Jalur Gemilang (Stripes of Glory); the 14 stripes stand for the equal status in the federation of the 13 member states and the federal government; the 14 points on the star represent the unity between these entities; the crescent is a traditional symbol of Islam; blue symbolizes the unity of the Malay people and yellow is the royal color of Malay rulers
note: the design is based on the flag of the US

name: "Negaraku" (My Country)
lyrics/music: collective, led by Tunku ABDUL RAHMAN/Pierre Jean DE BERANGER
note: adopted 1957; the full version is only performed in the presence of the king; the tune, which was adopted from a popular French melody titled "La Rosalie," was originally the anthem of the state of Perak

Malaysia, a middle-income country, has transformed itself since the 1970s from a producer of raw materials into an emerging multi-sector economy. Under current Prime Minister NAJIB, Malaysia is attempting to achieve high-income status by 2020 and to move farther up the value-added production chain by attracting investments in Islamic finance, high technology industries, biotechnology, and services. NAJIB's Economic Transformation Program (ETP) is a series of projects and policy measures intended to accelerate the country's economic growth. The government has also taken steps to liberalize some services sub-sectors. The NAJIB administration also is continuing efforts to boost domestic demand and reduce the economy's dependence on exports. Nevertheless, exports - particularly of electronics, oil and gas, palm oil and rubber - remain a significant driver of the economy. As an oil and gas exporter, Malaysia has profited from higher world energy prices, although the rising cost of domestic gasoline and diesel fuel, combined with sustained budget deficits, has forced Kuala Lumpur to begin to address fiscal shortfalls, through initial reductions in energy and sugar subsidies and the announcement of the 2015 implementation of a 6% goods and services tax. The government is also trying to lessen its dependence on state oil producer Petronas. The oil and gas sector supplies about 32% of government revenue in 2013. Bank Negara Malaysia (central bank) maintains healthy foreign exchange reserves, and a well-developed regulatory regime has limited Malaysia's exposure to riskier financial instruments and the global financial crisis. Nevertheless, Malaysia could be vulnerable to a fall in commodity prices or a general slowdown in global economic activity because exports are a major component of GDP. In order to attract increased investment, NAJIB earlier raised possible revisions to the special economic and social preferences accorded to ethnic Malays under the New Economic Policy of 1970, but retreated in 2013 after he encountered significant opposition from Malay nationalists and other vested interests. In September 2013 NAJIB launched the new Bumiputra Economic Empowerment Program (BEEP), policies that favor and advance the economic condition of ethnic Malays.

54.6% of GDP (2013 est.)
53.3% of GDP (2012 est.)
note: this figure is based on the amount of federal government debt, RM501.6 billion ($167.2 billion) in 2012; this includes Malaysian Treasury bills and other government securities, as well as loans raised externally and bonds and notes issued overseas; this figure excludes debt issued by non-financial public enterprises and guaranteed by the federal government, which was an additional $47.7 billion in 2012

the International Maritime Bureau reports that the territorial and offshore waters in the Strait of Malacca and South China Sea remain high risk for piracy and armed robbery against ships; in the past, commercial vessels have been attacked and hijacked both at anchor and while underway; hijacked vessels are often disguised and cargo diverted to ports in East Asia; crews have been murdered or cast adrift; increased naval patrols since 2005 in the Strait of Malacca resulted in no reported incidents in 2010

while the 2002 "Declaration on the Conduct of Parties in the South China Sea" has eased tensions over the Spratly Islands, it is not the legally binding "code of conduct" sought by some parties; Malaysia was not party to the March 2005 joint accord among the national oil companies of China, the Philippines, and Vietnam on conducting marine seismic activities in the Spratly Islands; disputes continue over deliveries of fresh water to Singapore, Singapore's land reclamation, bridge construction, and maritime boundaries in the Johor and Singapore Straits; in 2008, ICJ awarded sovereignty of Pedra Branca (Pulau Batu Puteh/Horsburgh Island) to Singapore, and Middle Rocks to Malaysia, but did not rule on maritime regimes, boundaries, or disposition of South Ledge; land and maritime negotiations with Indonesia are ongoing, and disputed areas include the controversial Tanjung Datu and Camar Wulan border area in Borneo and the maritime boundary in the Ambalat oil block in the Celebes Sea; separatist violence in Thailand's predominantly Muslim southern provinces prompts measures to close and monitor border with Malaysia to stem terrorist activities; Philippines retains a dormant claim to Malaysia's Sabah State in northern Borneo; per Letters of Exchange signed in 2009, Malaysia in 2010 ceded two hydrocarbon concession blocks to Brunei in exchange for Brunei's sultan dropping claims to the Limbang corridor, which divides Brunei; piracy remains a problem in the Malacca Strait

refugees (country of origin): 92,287 (Burma) (2013)
stateless persons: 40,001 (2012); note - Malaysia's stateless population consists of Rohingya refugees from Burma, ethnic Indians, and the children of Filipino and Indonesian illegal migrants; Burma stripped the Rohingya of their nationality in 1982; Filipino and Indonesian children who have not have been registered for birth certificates by their parents or who received birth certificates stamped "foreigner" are not eligible to go to government schools; these children are vulnerable to statelessness should they not be able to apply to their parents' country of origin for a passport

current situation: Malaysia is a destination and, to a lesser extent, a source and transit country for women and children subjected to conditions of forced labor and women and children subjected to sex trafficking; Malaysia is mainly a destination country for foreign workers who migrate willingly from countries including Indonesia, Nepal, India, Thailand, China, the Philippines, Burma, Cambodia, Laos, Bangladesh, Pakistan, and Vietnam but subsequently encounter forced labor or debt bondage at the hands of their employers in the domestic, agricultural, construction, plantation, and industrial sectors; a small number of Malaysian citizens were reportedly trafficked internally and abroad to Singapore, China, and Japan for commercial sexual exploitation; refugees are also vulnerable to trafficking; some officials are reportedly complicit in facilitating trafficking
tier rating: Tier 2 Watch List - Malaysia does not fully comply with the minimum standards for the elimination of trafficking; however, it is making significant efforts to do so; the government has made no tangible improvements to its inadequate system for identifying and protecting trafficking victims, such as amending its laws to allow victims to reside in NGO shelters; trafficking victims identified by Malaysian authorities are forcibly detained in government facilities, where they are provided with limited, if any, access to legal or psychological assistance by the government or NGOs; increasing efforts are being made to investigate and prosecute trafficking offenders, notably in the area of labor trafficking, though convictions of sex trafficking offenders has decreased; many front-line officials continue to lack the ability to recognize indicators of human trafficking, hindering the investigation of cases and the identification of victims; although the confiscation of passports by employers is illegal, the government has not prosecuted any employers who confiscated migrants' passports or travel documents or confined them to the workplace (2013)

These are the 50 largest cities of Malaysia ordered based on their number of inhabitants.