Ahmad Shah DURRANI unified the Pashtun tribes and founded Afghanistan in 1747. The country served as a buffer between the British and Russian Empires until it won independence from notional British control in 1919. A brief experiment in democracy ended in a 1973 coup and a 1978 communist counter-coup. The Soviet Union invaded in 1979 to support the tottering Afghan communist regime, touching off a long and destructive war. The USSR withdrew in 1989 under relentless pressure by internationally supported anti-communist mujahedin rebels. A series of subsequent civil wars saw Kabul finally fall in 1996 to the Taliban, a hardline Pakistani-sponsored movement that emerged in 1994 to end the country's civil war and anarchy. Following the 11 September 2001 terrorist attacks, a US, Allied, and anti-Taliban Northern Alliance military action toppled the Taliban for sheltering Osama BIN LADIN. The UN-sponsored Bonn Conference in 2001 established a process for political reconstruction that included the adoption of a new constitution, a presidential election in 2004, and National Assembly elections in 2005. In December 2004, Hamid KARZAI became the first democratically elected president of Afghanistan and the National Assembly was inaugurated the following December. KARZAI was re-elected in August 2009 for a second term. Despite gains toward building a stable central government, a resurgent Taliban and continuing provincial instability - particularly in the south and the east - remain serious challenges for the Afghan Government.

Southern Asia, north and west of Pakistan, east of Iran

limited natural freshwater resources; inadequate supplies of potable water; soil degradation; overgrazing; deforestation (much of the remaining forests are being cut down for fuel and building materials); desertification; air and water pollution

landlocked; the Hindu Kush mountains that run northeast to southwest divide the northern provinces from the rest of the country; the highest peaks are in the northern Vakhan (Wakhan Corridor) 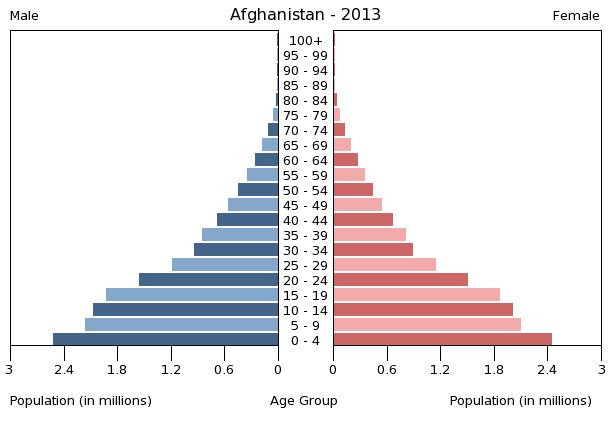 degree of risk: intermediate
food or waterborne diseases: bacterial diarrhea, hepatitis A, and typhoid fever
vectorborne disease: malaria
animal contact disease: rabies
note: highly pathogenic H5N1 avian influenza has been identified in this country; it poses a negligible risk with extremely rare cases possible among US citizens who have close contact with birds (2013)

the bicameral National Assembly consists of the Meshrano Jirga or House of Elders (102 seats, two-thirds of members elected from provincial councils for four-year terms, and one-third nominated by the president for five-year terms) and the Wolesi Jirga or House of People (no more than 250 seats; members directly elected for five-year terms)
note: the constitution allows the government to convene a constitutional Loya Jirga (Grand Council) on issues of independence, national sovereignty, and territorial integrity; it can amend the provisions of the constitution and prosecute the president; it is made up of members of the National Assembly and chairpersons of the provincial and district councils; no Loya Jirga of this type has ever been held, and district councils have never been elected
elections: last held on 18 September 2010 (next expected in 2015)
election results: results by party - NA; note - ethnicity is the main factor influencing political alliances; approximate percentage of seats by ethnic group - Pashtun 39%, Hazara 24%, Tajik 21%, Uzbek 6%, other 10% (including Aimak, Arab, Baloch, Nuristani, Pahhai, Turkmen, Turkic); women hold 69 seats

three equal vertical bands of black (hoist side), red, and green, with the national emblem in white centered on the red band and slightly overlapping the other two bands; the center of the emblem features a mosque with pulpit and flags on either side, below the mosque are numerals for the solar year 1298 (1919 in the Gregorian calendar, the year of Afghan independence from the UK); this central image is circled by a border consisting of sheaves of wheat on the left and right, in the upper-center is an Arabic inscription of the Shahada (Muslim creed) below which are rays of the rising sun over the Takbir (Arabic expression meaning "God is great"), and at bottom center is a scroll bearing the name Afghanistan; black signifies the past, red is for the blood shed for independence, and green can represent either hope for the future, agricultural prosperity, or Islam
note: Afghanistan had more changes to its national flag in the 20th century than any other country; the colors black, red, and green appeared on most of them

Afghanistan's economy is recovering from decades of conflict. The economy has improved significantly since the fall of the Taliban regime in 2001 largely because of the infusion of international assistance, the recovery of the agricultural sector, and service sector growth. Despite the progress of the past few years, Afghanistan is extremely poor, landlocked, and highly dependent on foreign aid. Much of the population continues to suffer from shortages of housing, clean water, electricity, medical care, and jobs. Criminality, insecurity, weak governance, lack of infrastructure, and the Afghan Government's difficulty in extending rule of law to all parts of the country pose challenges to future economic growth. Afghanistan's living standards are among the lowest in the world. The international community remains committed to Afghanistan's development, pledging over $67 billion at nine donors' conferences between 2003-10. In July 2012, the donors at the Tokyo conference pledged an additional $16 billion in civilian aid through 2015. Despite this help, the Government of Afghanistan will need to overcome a number of challenges, including low revenue collection, anemic job creation, high levels of corruption, weak government capacity, and poor public infrastructure. Afghanistan's growth rate slowed markedly in 2013.

state-owned broadcaster, Radio Television Afghanistan (RTA), operates a series of radio and television stations in Kabul and the provinces; an estimated 150 private radio stations, 50 TV stations, and about a dozen international broadcasters are available (2007)

18 is the legal minimum age for voluntary military service; no conscription (2012)

Afghan, Coalition, and Pakistan military meet periodically to clarify the alignment of the boundary on the ground and on maps; Afghan and Iranian commissioners have discussed boundary monument densification and resurvey; Iran protests Afghanistan's restricting flow of dammed Helmand River tributaries during drought; Pakistan has sent troops across and built fences along some remote tribal areas of its treaty-defined Durand Line border with Afghanistan which serve as bases for foreign terrorists and other illegal activities; Russia remains concerned about the smuggling of poppy derivatives from Afghanistan through Central Asian countries

current situation: Afghanistan is a source transit, and destination country for men, women, and children subjected to forced labor and sex trafficking, although domestic trafficking is more prevalent than transnational trafficking; Afghan men are subjected to forced labor and debt bondage in Iran, Pakistan, Greece, Turkey, and the Gulf states; Afghan women and girls are forced into prostitution and domestic servitude in Pakistan, Iran, and India, while women and girls from the Philippines, Pakistan, Iran, Tajikistan, and China are reportedly sexually exploited in Afghanistan; children are increasingly subjected to forced labor in carpet-making factories, domestic servitude, forced begging, and commercial sexual exploitation; some children are sold to settle debts
tier rating: Tier 2 Watch List - Afghanistan does not fully comply with the minimum standards for the elimination of trafficking in persons; anti-trafficking law enforcement efforts have improved, though official complicity in human trafficking remains a problem; the first known convictions were made under the government's 2008 anti-trafficking law; Afghanistan has not developed or employed systematic procedures to identify trafficking victims or refer them to protective services and continues to rely on NGOs to provide the vast majority of victim assistance; the government has not made discernible progress in preventing human trafficking or protecting victims but has adopted an anti-trafficking action plan (2013)

world's largest producer of opium; poppy cultivation increased 57 percent, from 115,000 hectares in 2011 to 180,000 hectares in 2012; despite the increase in area under cultivation, the effects of poor weather and crop disease resulted in lower yield so potential opium production remained stable at 4,300 mt in 2012 compared to 4,400 mt in 2011; the Taliban and other antigovernment groups participate in and profit from the opiate trade, which is a key source of revenue for the Taliban inside Afghanistan; widespread corruption and instability impede counterdrug efforts; most of the heroin consumed in Europe and Eurasia is derived from Afghan opium; Afghanistan is also struggling to respond to a burgeoning domestic opiate addiction problem; vulnerable to drug money laundering through informal financial networks; regional source of hashish (2013)

These are the 50 largest cities of Afghanistan ordered based on their number of inhabitants.