The UK annexed Southern Rhodesia from the [British] South Africa Company in 1923. A 1961 constitution was formulated that favored whites in power. In 1965 the government unilaterally declared its independence, but the UK did not recognize the act and demanded more complete voting rights for the black African majority in the country (then called Rhodesia). UN sanctions and a guerrilla uprising finally led to free elections in 1979 and independence (as Zimbabwe) in 1980. Robert MUGABE, the nation's first prime minister, has been the country's only ruler (as president since 1987) and has dominated the country's political system since independence. His chaotic land redistribution campaign, which began in 1997 and intensified after 2000, caused an exodus of white farmers, crippled the economy, and ushered in widespread shortages of basic commodities. Ignoring international condemnation, MUGABE rigged the 2002 presidential election to ensure his reelection. In April 2005, the capital city of Harare embarked on Operation Restore Order, ostensibly an urban rationalization program, which resulted in the destruction of the homes or businesses of 700,000 mostly poor supporters of the opposition. President MUGABE in June 2007 instituted price controls on all basic commodities causing panic buying and leaving store shelves empty for months; a period of increasing hyperinflation ensued. General elections held in March 2008 contained irregularities but still amounted to a censure of the ZANU-PF-led government with the opposition winning a majority of seats in parliament. MDC-T opposition leader Morgan TSVANGIRAI won the most votes in the presidential polls, but not enough to win outright. In the lead up to a run-off election in late June 2008, considerable violence enacted against opposition party members led to the withdrawal of TSVANGIRAI from the ballot. Extensive evidence of violence and intimidation resulted in international condemnation of the process. Difficult negotiations over a power-sharing "government of national unity," in which MUGABE remained president and TSVANGIRAI became prime minister, were finally settled in February 2009, although the leaders failed to agree upon many key outstanding governmental issues. MUGABE was reelected president in June 2013 in balloting that was severely flawed and internationally condemned. As a prerequisite to holding the elections, Zimbabwe enacted a new constitution by referendum, although many provisions in the new constitution have yet to be codified in law.

deforestation; soil erosion; land degradation; air and water pollution; the black rhinoceros herd - once the largest concentration of the species in the world - has been significantly reduced by poaching; poor mining practices have led to toxic waste and heavy metal pollution

party to: Biodiversity, Climate Change, Desertification, Endangered Species, Law of the Sea, Ozone Layer Protection
signed, but not ratified: none of the selected agreements

13,771,721
note: estimates for this country explicitly take into account the effects of excess mortality due to AIDS; this can result in lower life expectancy, higher infant mortality, higher death rates, lower population growth rates, and changes in the distribution of population by age and sex than would otherwise be expected (July 2014 est.)   evolution and prospects (1950-2100) 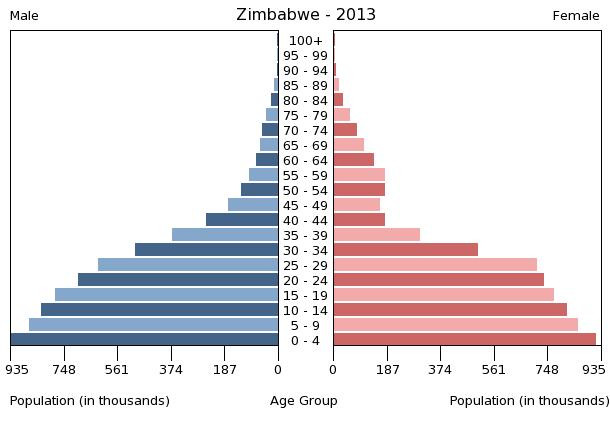 21.78 migrant(s)/1,000 population
note: there is an increasing flow of Zimbabweans into South Africa and Botswana in search of better economic opportunities (2014 est.)

chief of state: Executive President Robert Gabriel MUGABE (since 31 December 1987); Vice President Joice MUJURU (since 6 December 2004)
head of government: Executive President Robert Gabriel MUGABE (since 31 December 1987) note - according to the new constitution, following the 31 July 2013 presidential elections the position of Prime Minister was abolished
cabinet: Cabinet appointed by the president; responsible to the House of Assembly
elections: presidential candidates nominated with a nomination paper signed by at least 10 registered voters (at least one from each province) and elected by popular vote for a five-year term (no term limits); elections last held on 31 July 2013 (next to be held in 2018); co-vice presidents drawn from party leadership
election results: Robert Gabriel MUGABE reelected president; percent of vote - Robert Gabriel MUGABE 61.1%, Morgan TSVANGIRAI 34.4%, Welshman NCUBE 2.7% other 1.8%; note - the election process was considered flawed and roundly criticised by election monitors and international bodies; both the AU and the SADC endoresed the results of the election with some concerns

highest court(s): Supreme Court (consists of the chief justice and 4 judges)
judge selection and term of office: Supreme Court judges appointed by the president upon recommendation of the Judicial Service Commission, an independent body consisting of the chief justice, Public Service Commission chairman, attorney general, and 2-3 members appointed by the president; judges normally serve until age 65, but can elect to serve until age 70
subordinate courts: High Court, regional magistrate courts, and special courts

seven equal horizontal bands of green, yellow, red, black, red, yellow, and green with a white isosceles triangle edged in black with its base on the hoist side; a yellow Zimbabwe bird representing the long history of the country is superimposed on a red five-pointed star in the center of the triangle, which symbolizes peace; green represents agriculture, yellow mineral wealth, red the blood shed to achieve independence, and black stands for the native people

Zimbabwe's economy is growing despite continuing political uncertainty. Following a decade of contraction from 1998 to 2008, Zimbabwe's economy recorded real growth of roughly 10% per year in 2010-11, before slowing in 2012-13 due poor harvests and low diamond revenues. The government of Zimbabwe faces a number of difficult economic problems, including infrastructure and regulatory deficiencies, ongoing indigenization pressure, policy uncertainty, a large external debt burden, and insufficient formal employment. Until early 2009, the Reserve Bank of Zimbabwe routinely printed money to fund the budget deficit, causing hyperinflation. Dollarization in early 2009 - which allowed currencies such as the Botswana pula, the South Africa rand, and the US dollar to be used locally - ended hyperinflation and reduced inflation below 10% per year, but exposed structural weaknesses that continue to inhibit broad-based growth.

$23.03 billion (31 December 2013 est.)
$12.27 billion (31 December 2012 est.)
note: Zimbabwe's central bank no longer publishes data on monetary aggregates, except for bank deposits, which amounted to $2.1 billion in November 2010; the Zimbabwe dollar stopped circulating in early 2009; since then, the US dollar and South African rand have been the most frequently used currencies; there are no reliable estimates of the amount of foreign currency circulating in Zimbabwe

general assessment: system was once one of the best in Africa, but now suffers from poor maintenance
domestic: consists of microwave radio relay links, open-wire lines, radiotelephone communication stations, fixed wireless local loop installations, and a substantial mobile-cellular network; Internet connection is available in Harare and planned for all major towns and for some of the smaller ones
international: country code - 263; satellite earth stations - 2 Intelsat; 2 international digital gateway exchanges (in Harare and Gweru) (2010)

government owns all local radio and TV stations; foreign shortwave broadcasts and satellite TV are available to those who can afford antennas and receivers; in rural areas, access to TV broadcasts is extremely limited (2007)

(some navigation possible on Lake Kariba) (2011)

18-24 years of age for voluntary military service; no conscription; women are eligible to serve (2012)

Namibia has supported, and in 2004 Zimbabwe dropped objections to, plans between Botswana and Zambia to build a bridge over the Zambezi River, thereby de facto recognizing a short, but not clearly delimited, Botswana-Zambia boundary in the river; South Africa has placed military units to assist police operations along the border of Lesotho, Zimbabwe, and Mozambique to control smuggling, poaching, and illegal migration

current situation: Zimbabwe is a source, transit, and destination country for men, women, and children subjected to forced labor and sex trafficking; Zimbabwean women and girls from towns bordering South Africa, Mozambique, and Zambia are subjected to prostitution, sometimes being sold by their parents; Zimbabwean men, women, and children are subjected to forced labor in agriculture and domestic service in rural areas, as well as domestic servitude and sex trafficking in cities and towns; Zimbabwean women and men are lured into exploitative labor situations in Angola, Botswana, Mozambique, the United Arab Emirates, Malaysia, Nigeria, and South Africa with false job offers, while women and girls are lured to China, Egypt, the UK, and Canada and forced into prostitution; adults and children from Bangladesh, Somalia, India, Pakistan, the Democratic Republic of the Congo, Malawi, Mozambique, and Zambia are trafficked through Zimbabwe en route to South Africa
tier rating: Tier 3 - Zimbabwe does not fully comply with the minimum standards for the elimination of trafficking and is not making significant efforts to do so; tangible efforts to investigate and prosecute trafficking offenses, including those allegedly involving government officials, and to protect victims remain minimal; the government continues to rely on an international organization to provide law enforcement training and on NGOs to identify and assist victims without government support for such work; a national trafficking awareness campaign was launched in November 2012 (2013)

These are the 50 largest cities of Zimbabwe ordered based on their number of inhabitants.