Western Sahara is a disputed territory on the northwest coast of Africa bordered by Morocco, Mauritania, and Algeria. After Spain withdrew from its former colony of Spanish Sahara in 1976, Morocco annexed the northern two-thirds of Western Sahara and claimed the rest of the territory in 1979, following Mauritania's withdrawal. A guerrilla war with the Polisario Front contesting Morocco's sovereignty ended in a 1991 cease-fire and the establishment of a UN peacekeeping operation. As part of this effort, the UN sought to offer a choice to the peoples of the Western Sahara between independence (favored by the Polisario Front) or integration into Morocco. A proposed referendum never took place due to lack of agreement on voter eligibility. The 2,700 km- (1,700 mi-) long defensive sand berm, built by the Moroccans from 1980 to 1987 and running the length of the territory, continues to separate the opposing forces with Morocco controlling the roughly 80 percent of the territory west of the berm. Local demonstrations criticizing the Moroccan authorities occur regularly, and there are periodic ethnic tensions between the native Sahrawi population and Moroccan immigrants. Morocco maintains a heavy security presence in the territory.

about the size of Colorado

contingent upon resolution of sovereignty issue

mostly low, flat desert with large areas of rocky or sandy surfaces rising to small mountains in south and northeast

party to: none of the selected agreements

the waters off the coast are particularly rich fishing areas 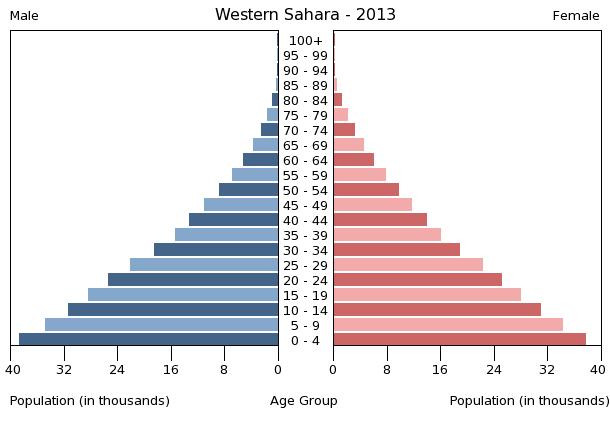 legal status of territory and issue of sovereignty unresolved; territory contested by Morocco and Polisario Front (Popular Front for the Liberation of the Saguia el Hamra and Rio de Oro), which in February 1976 formally proclaimed a government-in-exile, the Sahrawi Arab Democratic Republic (SADR), based out of refugee camps near Tindouf, Algeria, led by President Mohamed ABDELAZIZ

none (territory west of the berm under de facto Moroccan control)

none; (residents of Moroccan-controlled Western Sahara participate in Moroccan elections)

many neighboring states reject Moroccan administration of Western Sahara; several states have extended diplomatic relations to the "Sahrawi Arab Democratic Republic" represented by the Polisario Front in exile in Algeria, while others recognize Moroccan sovereignty over Western Sahara; approximately 90,000 Sahrawi refugees continue to be sheltered in camps in Tindouf, Algeria, which has hosted Sahrawi refugees since the 1980s

These are the 50 largest cities of Western Sahara ordered based on their number of inhabitants.