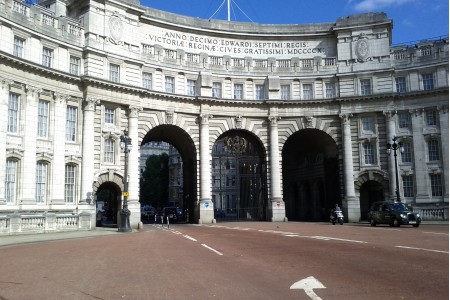 The United Kingdom has historically played a leading role in developing parliamentary democracy and in advancing literature and science. At its zenith in the 19th century, the British Empire stretched over one-fourth of the earth's surface. The first half of the 20th century saw the UK's strength seriously depleted in two world wars and the Irish Republic's withdrawal from the union. The second half witnessed the dismantling of the Empire and the UK rebuilding itself into a modern and prosperous European nation. As one of five permanent members of the UN Security Council and a founding member of NATO and the Commonwealth, the UK pursues a global approach to foreign policy. The UK is also an active member of the EU, although it chose to remain outside the Economic and Monetary Union. The Scottish Parliament, the National Assembly for Wales, and the Northern Ireland Assembly were established in 1999. The latter was suspended until May 2007 due to wrangling over the peace process, but devolution was fully completed in March 2010.

Western Europe, islands - including the northern one-sixth of the island of Ireland - between the North Atlantic Ocean and the North Sea; northwest of France

temperate; moderated by prevailing southwest winds over the North Atlantic Current; more than one-half of the days are overcast

continues to reduce greenhouse gas emissions (has met Kyoto Protocol target of a 12.5% reduction from 1990 levels and intends to meet the legally binding target and move toward a domestic goal of a 20% cut in emissions by 2010); by 2005 the government reduced the amount of industrial and commercial waste disposed of in landfill sites to 85% of 1998 levels and recycled or composted at least 25% of household waste, increasing to 33% by 2015

lies near vital North Atlantic sea lanes; only 35 km from France and linked by tunnel under the English Channel; because of heavily indented coastline, no location is more than 125 km from tidal waters

the UK does not celebrate one particular national holiday

common law system; has nonbinding judicial review of Acts of Parliament under the Human Rights Act of 1998

chief of state: Queen ELIZABETH II (since 6 February 1952); Heir Apparent Prince CHARLES (son of the queen, born 14 November 1948)
head of government: Prime Minister David CAMERON (since 11 May 2010)
cabinet: Cabinet of Ministers appointed by the prime minister
elections: the monarchy is hereditary; following legislative elections, the leader of the majority party or the leader of the majority coalition usually becomes the prime minister

bicameral Parliament consists of House of Lords; note - membership is not fixed (780 seats; consisting of approximately 667 life peers, 88 hereditary peers, and 25 clergy - as of 13 January 2014) and House of Commons (650 seats since 2010 elections; members elected by popular vote to serve five-year terms unless the House is dissolved earlier)
elections: House of Lords - no elections (note - in 1999, as provided by the House of Lords Act, elections were held in the House of Lords to determine the 92 hereditary peers who would remain there; elections are held only as vacancies in the hereditary peerage arise); House of Commons - last held on 6 May 2010 (next to be held by June 2015)
election results: House of Commons - percent of vote by party - Conservative 36.1%, Labor 29%, Liberal Democrats 23%, other 11.9%; seats by party - Conservative 305, Labor 258, Liberal Democrat 57, other 30
note: in 1998 elections were held for a Northern Ireland Assembly (because of unresolved disputes among existing parties, the transfer of power from London to Northern Ireland came only at the end of 1999 and has been suspended four times, the latest occurring in October 2002 and lasting until 8 May 2007); in 1999, the UK held the first elections for a Scottish Parliament and a Welsh Assembly; the most recent elections for the Northern Ireland Assembly, the Scottish Parliament, and the Welsh Assembly took place in May 2011

highest court(s): Supreme Court (consists of 12 justices including the court president and deputy president)
note - the Supreme Court was established by the Constitutional Reform Act 2005 and implemented in October 2009, replacing the Appellate Committee of the House of Lords as the highest court in the United Kingdom
judge selection and term of office: judge candidates selected by an independent committee of several judicial commissions, followed by their recommendations to the prime minister, and appointed by Her Majesty The Queen; justices appointed during period of good behavior
subordinate courts: England and Wales - Court of Appeal (civil and criminal divisions); High Court; Crown Court; County Courts; Magistrates' Courts; Scotland - Court of Sessions; Sherrif Courts; High Court of Justiciary; tribunals; Northern Ireland - Court of Appeal in Northern Ireland; High Court; county courts; magistrates' courts; specialized tribunals

The UK, a leading trading power and financial center, is the third largest economy in Europe after Germany and France. Over the past two decades, the government has greatly reduced public ownership. Agriculture is intensive, highly mechanized, and efficient by European standards, producing about 60% of food needs with less than 2% of the labor force. The UK has large coal, natural gas, and oil resources, but its oil and natural gas reserves are declining and the UK became a net importer of energy in 2005. Services, particularly banking, insurance, and business services, are key drivers of British GDP growth. Manufacturing, meanwhile, has declined in importance but still accounts for about 10% of economic output. After emerging from recession in 1992, Britain's economy enjoyed the longest period of expansion on record during which time growth outpaced most of Western Europe. In 2008, however, the global financial crisis hit the economy particularly hard, due to the importance of its financial sector. Falling home prices, high consumer debt, and the global economic slowdown compounded Britain's economic problems, pushing the economy into recession in the latter half of 2008 and prompting the then BROWN (Labour) government to implement a number of measures to stimulate the economy and stabilize the financial markets; these included nationalizing parts of the banking system, temporarily cutting taxes, suspending public sector borrowing rules, and moving forward public spending on capital projects. Facing burgeoning public deficits and debt levels, in 2010 the CAMERON-led coalition government (between Conservatives and Liberal Democrats) initiated a five-year austerity program, which aimed to lower London's budget deficit from about 11% of GDP in 2010 to nearly 1% by 2015. In November 2011, Chancellor of the Exchequer George OSBORNE announced additional austerity measures through 2017 largely due to the euro-zone debt crisis. The CAMERON government raised the value added tax from 17.5% to 20% in 2011. It has pledged to reduce the corporation tax rate to 21% by 2014. The Bank of England (BoE) implemented an asset purchase program of £375 billion (approximately $605 billion) as of December 2013. During times of economic crisis, the BoE coordinates interest rate moves with the European Central Bank, but Britain remains outside the European Economic and Monetary Union (EMU). In 2012, weak consumer spending and subdued business investment weighed on the economy, however, in 2013 GDP grew 1.4%, accelerating unexpectedly in the second half of the year because of greater consumer spending and a recovering housing market. The budget deficit is falling but remains high at nearly 7% and public debt has continued to increase.

91.1% of GDP (2013 est.)
88.7% of GDP (2012 est.)
note: data cover general government debt, and include debt instruments issued (or owned) by government entities other than the treasury; the data include treasury debt held by foreign entities; the data include debt issued by subnational entities, as well as intra-governmental debt; intra-governmental debt consists of treasury borrowings from surpluses in the social funds, such as for retirement, medical care, and unemployment; debt instruments for the social funds are not sold at public auctions

in 2002, Gibraltar residents voted overwhelmingly by referendum to reject any "shared sovereignty" arrangement between the UK and Spain; the Government of Gibraltar insisted on equal participation in talks between the two countries; Spain disapproved of UK plans to grant Gibraltar greater autonomy; Mauritius and Seychelles claim the Chagos Archipelago (British Indian Ocean Territory); in 2001, the former inhabitants of the archipelago, evicted 1967 - 1973, were granted U.K. citizenship and the right of return, followed by Orders in Council in 2004 that banned rehabitation, a High Court ruling reversed the ban, a Court of Appeal refusal to hear the case, and a Law Lords' decision in 2008 denied the right of return; in addition, the United Kingdom created the world's largest marine protection area around the Chagos islands prohibiting the extraction of any natural resources therein; UK rejects sovereignty talks requested by Argentina, which still claims the Falkland Islands (Islas Malvinas) and South Georgia and the South Sandwich Islands; territorial claim in Antarctica (British Antarctic Territory) overlaps Argentine claim and partially overlaps Chilean claim; Iceland, the UK, and Ireland dispute Denmark's claim that the Faroe Islands' continental shelf extends beyond 200 nm

These are the 50 largest cities of United Kingdom ordered based on their number of inhabitants.