A unified Thai kingdom was established in the mid-14th century. Known as Siam until 1939, Thailand is the only Southeast Asian country never to have been taken over by a European power. A bloodless revolution in 1932 led to a constitutional monarchy. In alliance with Japan during World War II, Thailand became a US treaty ally in 1954 after sending troops to Korea and later fighting alongside the United States in Vietnam. Thailand since 2005 has experienced several rounds of political turmoil including a military coup in 2006 that ousted then Prime Minister THAKSIN Chinnawat, followed by large-scale street protests by competing political factions in 2008, 2009, and 2010. THAKSIN's youngest sister, YINGLAK Chinnawat, in 2011 led the Puea Thai Party to an electoral win and assumed control of the government. A blanket amnesty bill for individuals involved in street protests, altered at the last minute to include all political crimes - including all convictions against THAKSIN - triggered months of large-scale anti-government protests in Bangkok beginning in November 2013. In early May 2014 YINGLAK was removed from office and in late May 2014 the Royal Thai Army staged a coup against the caretaker government. Thailand has also experienced violence associated with the ethno-nationalist insurgency in Thailand's southern Malay-Muslim majority provinces. Since January 2004, thousands have been killed and wounded in the insurgency.

Southeastern Asia, bordering the Andaman Sea and the Gulf of Thailand, southeast of Burma

slightly more than twice the size of Wyoming

land subsidence in Bangkok area resulting from the depletion of the water table; droughts

controls only land route from Asia to Malaysia and Singapore

67,741,401
note: estimates for this country explicitly take into account the effects of excess mortality due to AIDS; this can result in lower life expectancy, higher infant mortality, higher death rates, lower population growth rates, and changes in the distribution of population by age and sex than would otherwise be expected (July 2014 est.)   evolution and prospects (1950-2100) 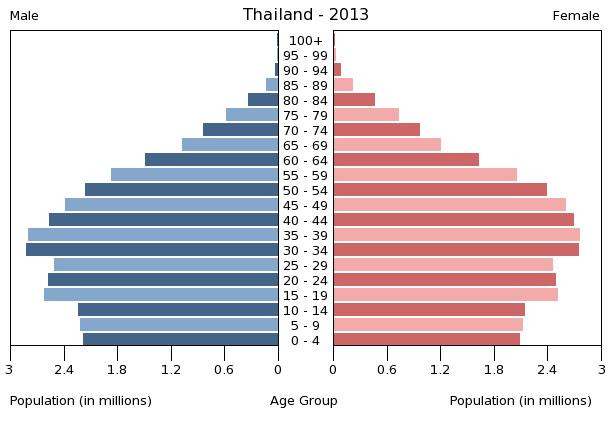 degree of risk: very high
food or waterborne diseases: bacterial diarrhea
vectorborne diseases: dengue fever, Japanese encephalitis, and malaria
note: highly pathogenic H5N1 avian influenza has been identified in this country; it poses a negligible risk with extremely rare cases possible among US citizens who have close contact with birds (2013)

18 years of age; universal and compulsory

chief of state: King PHUMIPHON Adunyadet, also spelled BHUMIBOL Adulyadej (since 9 June 1946)
head of government: Prime Minister (acting) NIWATTAMRONG Boonsongpaisan; Deputy Prime Minister PHONGTHEP Thepkanchana also spelled PHONGTHEP Therkanchana (since 28 October 2012); Deputy Prime Minister YUKHON Limlaemthong (since 25 March 2013); note - 4 other deputy prime ministers were removed from office on 7 May 2014
note: Prime Minister YINGLAK Chinnawat, also spelled YINGLUCK Shinawatra, was removed from office on 7 May 2014 after the Constitutional Court ruled she illegally transferred a government official; Thai army declared martial law on 20 May 2014 and a coup on 22 May 2014
cabinet: Council of Ministers
note: a Privy Council advises the king
elections: the monarchy is hereditary; the prime minister is elected from among members of the House of Representatives; following national elections for the House of Representatives, the leader of the party positioned to organize a majority coalition usually becomes prime minister by appointment by the king; the prime minister is limited to two four-year terms

bicameral National Assembly or Rathasapha consisted of the Senate or Wuthisapha (150 seats; 76 members elected by popular vote representing 75 provinces and 1 metropolitan district (Bangkok), 74 appointed by the Senate Selection Committee; members serve six-year terms) and the House of Representatives or Sapha Phuthaen Ratsadon (500 seats; 375 members elected from 375 single-seat constituencies and 125 elected on proportional party-list basis; members serve four-year terms)
elections: Senate - last held on 30 March 2014; House of Representatives - last held on 2 February 2014, but later declared invalid by the Constitutional Court; a new election will be held on 20 July 2014
election results: Senate - percent of vote by party - NA; seats by party - NA; House of Representatives - percent of vote by party - NA; seats by party - NA
note: 73 senators were appointed on 12 April 2011 by a seven-member committee headed by the chief of the Constitutional Court; 76 senators were elected on 30 March 2014; elections to the Senate are non-partisan; registered political party members are disqualified from being senators

five horizontal bands of red (top), white, blue (double width), white, and red; the red color symbolizes the nation and the blood of life; white represents religion and the purity of Buddhism; blue stands for the monarchy
note: similar to the flag of Costa Rica but with the blue and red colors reversed

name: "Phleng Chat Thai" (National Anthem of Thailand)
lyrics/music: Luang SARANUPRAPAN/Phra JENDURIYANG
note: music adopted 1932, lyrics adopted 1939; by law, people are required to stand for the national anthem at 0800 and 1800 every day; the anthem is played in schools, offices, theaters, and on television and radio during this time; "Phleng Sansasoen Phra Barami" (A Salute to the Monarch) serves as the royal anthem and is played in the presence of the royal family and during certain state ceremonies

With a well-developed infrastructure, a free-enterprise economy, generally pro-investment policies, and strong export industries, Thailand achieved steady growth due largely to industrial and agriculture exports - mostly electronics, agricultural commodities, automobiles and parts, and processed foods. Unemployment, at less than 1% of the labor force, stands as one of the lowest levels in the world, which puts upward pressure on wages in some industries. Thailand also attracts nearly 2.5 million migrant workers from neighboring countries. The Thai government in 2013 implemented a nation-wide 300 baht ($10) per day minimum wage policy and deployed new tax reforms designed to lower rates on middle-income earners. The Thai economy has weathered internal and external economic shocks in recent years. The global economic recession severely cut Thailand's exports, with most sectors experiencing double-digit drops. In late 2011 Thailand's recovery was interrupted by historic flooding in the industrial areas in Bangkok and its five surrounding provinces, crippling the manufacturing sector. The government approved flood mitigation projects worth $11.7 billion, which were started in 2012, to prevent similar economic damage, and an additional $75 billion for infrastructure over the following seven years. This was expected to lead to an economic upsurge but growth has remained slow, in part due to ongoing political unrest and resulting uncertainties. Spending on infrastructure will require re-approval once a new government is seated.

45.9% of GDP (2013 est.)
45.8% of GDP (2012 est.)
note: data cover general government debt, and includes debt instruments issued (or owned) by government entities other than the treasury; the data include treasury debt held by foreign entities; the data include debt issued by subnational entities, as well as intra-governmental debt; intra-governmental debt consists of treasury borrowings from surpluses in the social funds, such as for retirement, medical care, and unemployment; debt instruments for the social funds are sold at public auctions

6 terrestrial TV stations in Bangkok broadcast nationally via relay stations - 2 of the networks are owned by the military, the other 4 are government-owned or controlled, leased to private enterprise, and all are required to broadcast government-produced news programs twice a day; multi-channel satellite and cable TV subscription services are available; radio frequencies have been allotted for more than 500 government and commercial radio stations; many small community radio stations operate with low-power transmitters (2008)

separatist violence in Thailand's predominantly Malay-Muslim southern provinces prompt border closures and controls with Malaysia to stem insurgent activities; Southeast Asian states have enhanced border surveillance to check the spread of avian flu; talks continue on completion of demarcation with Laos but disputes remain over several islands in the Mekong River; despite continuing border committee talks, Thailand must deal with Karen and other ethnic rebels, refugees, and illegal cross-border activities; Cambodia and Thailand dispute sections of boundary; in 2011 Thailand and Cambodia resorted to arms in the dispute over the location of the boundary on the precipice surmounted by Preah Vihear temple ruins, awarded to Cambodia by ICJ decision in 1962 and part of a planned UN World Heritage site; Thailand is studying the feasibility of jointly constructing the Hatgyi Dam on the Salween river near the border with Burma; in 2004, international environmentalist pressure prompted China to halt construction of 13 dams on the Salween River that flows through China, Burma, and Thailand; 140,000 mostly Karen refugees fleeing civil strife, political upheaval and economic stagnation in Burma live in remote camps in Thailand near the border

refugees (country of origin): 78,970 (Burma) (2013)
IDPs: up to 35,000 (resurgence in ethno-nationalist violence in south of country since 2004) (2013)
stateless persons: 506,197 (2012); note - about half of Thailand's northern hill tribe people do not have citizenship and make up the bulk of Thailand's stateless population; most lack documentation showing they or one of their parents were born in Thailand; children born to Burmese refugees are not eligible for Burmese or Thai citizenship and are stateless; most Chao Lay, maritime nomadic peoples, who travel from island to island in the Andaman Sea west of Thailand are also stateless; stateless Rohingya refugees from Burma are considered illegal migrants by Thai authorities and are detained in inhumane conditions or expelled; stateless persons are denied access to voting, property, education, employment, healthcare, and driving

current situation: Thailand is a source, transit, and destination country for men, women, and children subjected to forced labor and sex trafficking; victims, who are most often from neighboring countries, especially Burma, and also China, Vietnam, Russia, Uzbekistan, and Fiji, migrate to Thailand in search of economic opportunities but are forced, coerced, or defrauded into labor or commercial sexual exploitation; forced laborers are exploited in fishing, low-end garment production, domestic service, and some are forced to beg; some men forced to work on fishing boats have reportedly been kept at sea for years; sex trafficking of Thai and migrant children and sex tourism remain significant problems; Thailand is a transit country for victims from North Korea, China, Vietnam, Pakistan, and Burma destined for exploitation in third countries, including Malaysia, Indonesia, Singapore, Russia, the Republic of Korea, the US, and Western European countries
tier rating: Tier 2 Watch List - Thailand does not fully comply with the minimum standards for the elimination of trafficking; the government investigated more trafficking-related cases but prosecuted and convicted fewer trafficking offender in 2012 than it did in the previous year; widespread corruption among law enforcement personnel creates an enabling environment for human trafficking; local authorities lack an awareness of the elements of trafficking and are deficient at identifying and protecting victims; weak law enforcement, inadequate human and financial resources, and fragmented coordination among regulatory agencies in the fishing industry contributes to overall impunity for exploitive labor practices in this sector; no labor recruitment companies have been punished for forced labor or trafficking allegations (2013)

a minor producer of opium, heroin, and marijuana; transit point for illicit heroin en route to the international drug market from Burma and Laos; eradication efforts have reduced the area of cannabis cultivation and shifted some production to neighboring countries; opium poppy cultivation has been reduced by eradication efforts; also a drug money-laundering center; minor role in methamphetamine production for regional consumption; major consumer of methamphetamine since the 1990s despite a series of government crackdowns

These are the 50 largest cities of Thailand ordered based on their number of inhabitants.