Military regimes favoring Islamic-oriented governments have dominated national politics since independence from Anglo-Egyptian co rule in 1956. Sudan was embroiled in two prolonged civil wars during most of the remainder of the 20th century. These conflicts were rooted in northern economic, political, and social domination of largely non-Muslim, non-Arab southern Sudanese. The first civil war ended in 1972 but another broke out in 1983. Peace talks gained momentum in 2002-04 with the signing of several accords. The final North/South Comprehensive Peace Agreement (CPA), signed in January 2005, granted the southern rebels autonomy for six years followed by a referendum on independence for Southern Sudan. The referendum was held in January 2011 and indicated overwhelming support for independence. South Sudan became independent on 9 July 2011. Sudan and South Sudan have yet to fully implement security and economic agreements signed on September 27, 2012 relating to the normalization of relations between the two countries. The final disposition of the contested Abyei region has also to be decided. Since South Sudan's independence, conflict has broken out between the government and the Sudan People's Liberation Movement-North (SPLM-N) in Southern Kordofan and Blue Nile states, which has resulted in 1.2 million internally displaced persons or severely affected persons in need of humanitarian assistance. A separate conflict, which broke out in the western region of Darfur in 2003, has displaced nearly two million people and caused an estimated 200,000 to 400,000 deaths. Violence in Darfur in 2013 resulted in an additional estimated 6,000 civilians killed and 500,000 displaced. The UN and the African Union have jointly commanded a Darfur peacekeeping operation known as the African Union-United Nations Hybrid Mission in Darfur (UNAMID) since 2007. Peacekeeping troops have struggled to stabilize the situation and have increasingly become targets for attacks by armed groups. In 2013, 16 peacekeepers were killed, UNAMID's deadliest year so far. Sudan also has faced refugee influxes from neighboring countries, primarily Ethiopia, Eritrea, Chad, Central African Republic, and South Sudan. Armed conflict, poor transport infrastructure, and government denial of access have impeded the provision of humanitarian assistance to affected populations.

north-eastern Africa, bordering the Red Sea, between Egypt and Eritrea

slightly less than one-fifth the size of the US

dominated by the Nile and its tributaries 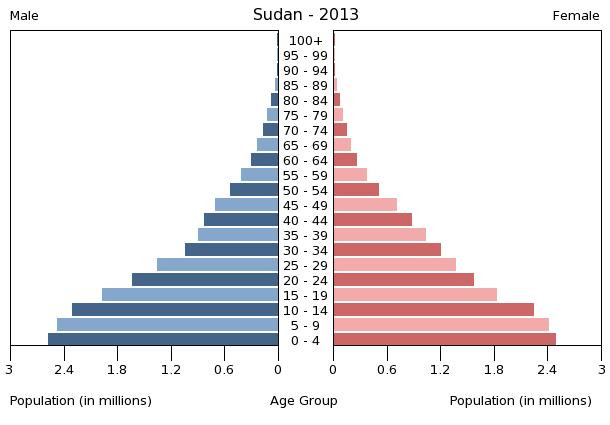 federal republic ruled by the National Congress Party (NCP), which seized power by military coup in 1989; the CPA-mandated Government of National Unity, which between 2005 and 2011 provided a percentage of leadership posts to the southern Sudan-based Sudan People's Liberation Movement (SPLM), was disbanded following the secession of South Sudan

bicameral National Legislature consists of a Council of States (50 seats; members indirectly elected by state legislatures to serve six-year terms) and a National Assembly (450 seats; 60% from geographic constituencies, 25% from a women's list, and 15% from party lists; members to serve six-year terms)
elections: last held on 11-15 April 2010 (next to be held in 2015)
election results: National Assembly - percent of vote by party - NA; seats by party - NCP 323, SPLM 99, PCP 4, DUP 4, UFP 3, URDP 2, DUPO 2, SPLM-DC 2, other 7, vacant 4; composition of National Assembly following South Sudan's independence - seats by party - NCP 317, SPLM 8, PCP 4, DUP 4, UFP 3, URDP 2, DUPO 1, UP 1, UNP 1, UCLP 1, MB 1, independent 3, vacant 8
note: the mandate of the members from the south was terminated upon independence by the Republic of South Sudan effective 9 July 2011 and membership in Sudan's National Assembly was reduced to 354; it is unclear whether this total will be retained for the next election or whether the previous total of 450 will be reconstituted

three equal horizontal bands of red (top), white, and black with a green isosceles triangle based on the hoist side; colors and design based on the Arab Revolt flag of World War I, but the meanings of the colors are expressed as follows: red signifies the struggle for freedom, white is the color of peace, light, and love, black represents Sudan itself (in Arabic 'Sudan' means black), green is the color of Islam, agriculture, and prosperity

name: "Nahnu Djundulla Djundulwatan" (We Are the Army of God and of Our Land)
lyrics/music: Sayed Ahmad Muhammad SALIH/Ahmad MURJAN
note: adopted 1956; the song originally served as the anthem of the Sudanese military

Sudan is an extremely poor country that has experienced protracted social conflict, civil war, and, in July 2011, the loss of three-quarters of its oil production due to the secession of South Sudan. The oil sector had driven much of Sudan's GDP growth since 1999. For nearly a decade, the economy boomed on the back of rising oil production, high oil prices, and significant inflows of foreign direct investment. Since the economic shock of South Sudan's secession, Sudan has struggled to stabilize its economy and make up for the loss of foreign exchange earnings. The interruption of oil production in South Sudan in 2012 for over a year and the consequent loss of oil transit fees further exacerbated the fragile state of Sudan’s economy. Sudan is also subject to comprehensive US sanctions. Sudan is attempting to develop non-oil sources of revenues, such as gold mining, while carrying out an austerity program to reduce expenditures. The world’s largest exporter of gum Arabic, Sudan produces 75-80% of the world’s total output. Agriculture continues to employ 80% of the work force. Sudan introduced a new currency, still called the Sudanese pound, following South Sudan's secession, but the value of the currency has fallen since its introduction. Khartoum formally devalued the currency in June 2012, when it passed austerity measures that included gradually repealing fuel subsidies. Sudan also faces rising inflation, which reached 47% on an annual basis in November 2012, but subsided to 25% in 2013. Ongoing conflicts in Southern Kordofan, Darfur, and the Blue Nile states, lack of basic infrastructure in large areas, and reliance by much of the population on subsistence agriculture keep close to half of the population at or below the poverty line.

the Sudanese Government directly controls TV and radio, requiring that both media reflect government policies; TV has a permanent military censor; a private radio station is in operation (2007)

18-33 years of age for male and female compulsory or voluntary military service; 1-2 year service obligation; a requirement that completion of national service was mandatory before entering public or private sector employment has been cancelled (2012)

the effects of Sudan's almost constant ethnic and rebel militia fighting since the mid-20th century have penetrated all of the neighboring states; Chad wishes to be a helpful mediator in resolving the Darfur conflict, and in 2010 established a joint border monitoring force with Sudan, which has helped to reduce cross-border banditry and violence; as of mid-2013, Chad, Egypt, Ethiopia, Israel, the Central African Republic, and South Sudan provided shelter for more than 600,000 Sudanese refugees; during the same period, Sudan, in turn, hosted about 115,000 Eritreans, 32,000 Chadians, and smaller numbers of Ethiopians and Central Africans; Sudan accuses Eritrea of supporting Sudanese rebel groups; efforts to demarcate the porous boundary with Ethiopia proceed slowly due to civil and ethnic fighting in eastern Sudan; Sudan claims but Egypt de facto administers security and economic development of the Halaib region north of the 22nd parallel boundary; periodic violent skirmishes with Sudanese residents over water and grazing rights persist among related pastoral populations along the border with the Central African Republic; South Sudan-Sudan boundary represents 1 January 1956 alignment, final alignment pending negotiations and demarcation; final sovereignty status of Abyei Area pending negotiations between South Sudan and Sudan

current situation: Sudan is a source, transit, and destination country for men, women, and children who are subjected to forced labor and sex trafficking; Sudanese women and girls, particularly those from rural areas or who are internally displaced, are vulnerable to forced labor as domestic workers in homes throughout the country; some of these women and girls are subsequently sexually abused by male occupants of the household or forced to engage in commercial sex acts; Sudanese women and girls are subjected to domestic servitude in Middle Eastern countries and to forced sex trafficking in European countries; some Sudanese men who voluntarily migrate to the Middle East as low-skilled laborers face conditions indicative of forced labor; Sudanese children in Saudi Arabia are used in forced begging and street vending; Sudan is a transit and destination country for Ethiopian and Eritrean women subjected to domestic servitude in Sudan and Middle Eastern countries; Sudan is a destination for Ethiopian, Somali, and possibly Thai women subjected to forced prostitution; Sudanese children in Darfur are forcibly conscripted, at times through abduction, and used by armed groups and government security forces
tier rating: Tier 3 - Sudan does not fully comply with the minimum standards for the elimination of trafficking and is not making significant efforts to do so; while the government has taken some initial steps to draft anti-trafficking legislation, prosecute suspected traffickers, demobilize and reintegrate child soldiers, and has convened its first workshop to discuss human trafficking, its efforts to combat human trafficking through law enforcement, protection, or prevention measures are undertaken in an ad hoc fashion, rather than as the result of strategic planning; the government has not employed a system for proactively identifying trafficking victims among vulnerable populations or a referral process for transferring victims to organizations providing care; its proxy militias reportedly unlawfully recruited and used child soldiers during the reporting period; the government has not taken action to conclude a proposed action plan with the UN to address the problem (2013)

These are the 50 largest cities of Sudan ordered based on their number of inhabitants.