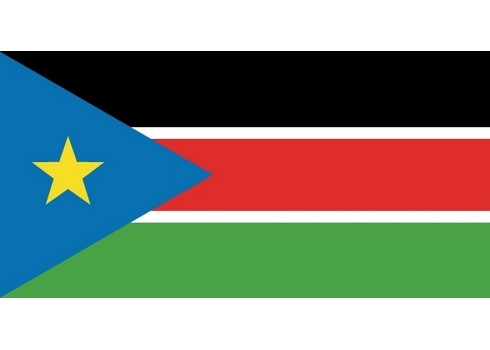 Luol Deng is a British professional basketball player who currently plays for the Chicago Bulls of the National Basketball Association. He has also competed with the Great Britain national basketball team. He was selected for his first NBA All-Star game during the 2011–12 season, joining teammate Derrick Rose. Born in what is now South Sudan, Deng fled the country with his family as a child, moving to Egypt and then the United Kingdom, becoming a British citizen in 2006.

John Garang de Mabior was a Sudanese politician and leader. From 1983 to 2005, he led the Sudan People's Liberation Army during the Second Sudanese Civil War, and following a peace agreement he briefly served as First Vice President of Sudan from 9 July 2005 until he died in a 30 July 2005 helicopter crash.

Alek Wek is a South Sudanese British model who first appeared on the catwalks at the age of 18 in 1995, sparking a career lasting to date. She is from the Dinka ethnic group in South Sudan, but in 1991 she and some family members fled to Britain to escape the civil war in Sudan. She later moved to the United States.

Emmanuel Jal is a South Sudanese musician and former child soldier. As well as a world recognized hip-hop artist, Jal is also a humanitarian advocate for social justice and human rights. He broadcasts his message of peace and equality through his music and through various NGOs he has founded and involved himself with.

James Joseph Saeed Moga is a South Sudanese football striker who currently plays for East Bengal in the Indian I-League.

Guor Marial is a South Sudanese track and field athlete. He is a Dinka tribesman. Marial competed in the men's marathon at the 2012 Summer Olympics. Because South Sudan does not yet have a recognized National Olympic committee, Marial competed under the Olympic Flag at the 2012 Olympics, rather than the South Sudanese flag. He was one of four athletes competing in the 2012 Summer Olympics under the Olympic flag rather than that of an individual country.

Francis Piol Bol Bok, a Dinka tribesman and native of South Sudan, was a slave for ten years but is now an abolitionist and author living in the United States. On May 15, 1986, he was captured and enslaved at the age of seven during an Arab militia raid on the village of Nymlal in South Sudan during the Second Sudanese Civil War. Bok lived in bondage for ten years before escaping imprisonment in Kurdufan, Sudan, followed by a journey to the United States by way of Cairo, Egypt. Bok was aided by people of diverse cultures and faiths in his journey to freedom. His earliest steps towards the United States were helped by a Northern Sudanese Muslim family that believed that slavery was wrong and provided him a bus ticket to Khartoum. Upon arriving in Khartoum, Bok was aided by a fellow Dinka tribesman and members of the Fur people, and his trip to the United States was paid for by members of the Lutheran church. His first point of contact in the United States was a refugee from Somalia who helped him get settled in Fargo, North Dakota. Bok has testified before the United States Senate and met with George W. Bush, Madeleine Albright and Condoleezza Rice, telling them his story of slavery. He has been honored by the United States Olympic Committee, the Boston Celtics and colleges and universities throughout the United States and Canada. Francis now lives in the U.S. state of Kansas, where he works for the American Anti-Slavery Group and Sudan Sunrise, an organization that works for peace in Sudan. Bok's autobiography, Escape from Slavery: The True Story of My Ten Years in Captivity and My Journey to Freedom in America, published by St. Martin's Press, chronicles his life, from his early youth, his years in captivity, to his work in the United States as an abolitionist.

Dr. Lam Akol Ajawin is a South Sudanese politician of Shilluk descent. He is the current leader of Sudan People's Liberation Movement - Democratic Change, which he founded 6 June 2009. He is a former high-ranking official in the Sudan People's Liberation Army, and subsequently became the minister of foreign affairs for the Republic of Sudan from September 2005 to October 2007, when the Khartoum government offered the SPLA several other key ministries as part of a peace agreement.

Lieutenant General Nhial Deng Nhial is a South Sudanese politician and a member of the ruling Sudan People's Liberation Movement. He was appointed the Minister of Foreign Affairs on August 26, 2011 after having served as the caretaker Minister of Defense since July 10, 2011. Prior to that he served as the pre-independence South Sudanese Minister of SPLA and Veteran Affairs, from December 22, 2008 until July 9, 2011.

Ajou Ajou Deng is a British-South Sudanese professional basketball player. He is the son of Aldo Deng, a former Sudanese politician and is the brother of Luol Deng, an NBA player who is also his teammate on Great Britain's national team.

Deng Gai is a South Sudanese former professional basketball player. A power forward, he played in the NBA and in several other leagues. Gai was the 2005 NCAA Division I men's basketball season blocks leader.

Jimmy Lemi Milla was a Sudanese politician, and Cabinet member in Southern Sudan. He was a Pojulu.

James Wani Igga is the vice president of South Sudan. He was previously Speaker of the National Legislative Assembly and secretary general of the SPLM.

Panther Garang Bior is one of the 27,000 Lost Boys of Sudan. His journey was featured in the National Geographic Society's 2007 award-winning documentary, God Grew Tired of Us.

Angelina Teny is a South Sudan politician who was state minister of Energy and Mining in the Khartoum-based Government of National Unity between 2005 and 2010. She ran for election as governor of Unity State in April 2010 but was defeated in an election that she claimed was rigged.

Daniel Koat Mathews is a Sudanese politician and Nuer leader, who has been effectively involved in the national politics for many years. He is now a Major General in the Sudan People's Liberation Army.

Chier Ajou is a basketball player.

"Only As Separate Nations Can We Live in Peace With Our Northern Neighbour" - Joseph Oduho Haworu was a leading politician from South Sudan who was active in the struggle for independence and a founding member of the Sudan People's Liberation Movement.

Samuel Aru Bol was a prominent politician in Southern Sudan. During the Second Sudanese Civil War he signed the Khartoum Peace Agreement of 1997 as representative for the Union of Sudan African Parties.

Mading Thok is a basketball player who plays for the Ball State Cardinals men's basketball team.

Majok Majok is a basketball player who plays for the Ball State Cardinals men's basketball team.

David Nyarsuk is a Basketball player.

Khamis Leyano is a South Sudanese footballer who currently plays as a striker. He is the vice-captain of the national team. He captained the team in the 2012 CECAFA Cup in the absence of Richard Justin and James Moga.

Person or entity appearing in film

Josephine Apieu Jenaro Aken a member of the Luo group from the Bahr el Ghazal area was born in Wau, Western Bahr el Ghazal, South Sudan. She was a senior civil servant in the Government of Southern Sudan who lost her life alongside her husband Minister for SPLA Affairs General Dominic Dim Deng, senior politician Dr. Justin Yac Arop and 18 other Sudan People's Liberation Army/Government officials on a leased CEM Air Beechcraft 1900 that crashed 375 km west of Juba, Sudan on May 2, 2008. Before joining the Government of South Sudan, she was the Director of the Sudan Women Association based in London Abbey Community Centre, Kilburn, London, UK.

Awino Gam appeared in the 2003 film Tears of the Sun.