Britain withdrew from British Somaliland in 1960 to allow its protectorate to join with Italian Somaliland and form the new nation of Somalia. In 1969, a coup headed by Mohamed SIAD Barre ushered in an authoritarian socialist rule characterized by the persecution, jailing, and torture of political opponents and dissidents. After the regime's collapse early in 1991, Somalia descended into turmoil, factional fighting, and anarchy. In May 1991, northern clans declared an independent Republic of Somaliland that now includes the administrative regions of Awdal, Woqooyi Galbeed, Togdheer, Sanaag, and Sool. Although not recognized by any government, this entity has maintained a stable existence and continues efforts to establish a constitutional democracy, including holding municipal, parliamentary, and presidential elections. The regions of Bari, Nugaal, and northern Mudug comprise a neighboring semi-autonomous state of Puntland, which has been self-governing since 1998 but does not aim at independence; it has also made strides toward reconstructing a legitimate, representative government but has suffered some civil strife. Puntland disputes its border with Somaliland as it also claims portions of eastern Sool and Sanaag. Beginning in 1993, a two-year UN humanitarian effort (primarily in the south) was able to alleviate famine conditions, but when the UN withdrew in 1995, having suffered significant casualties, order still had not been restored. In 2000, the Somalia National Peace Conference (SNPC) held in Djibouti resulted in the formation of an interim government, known as the Transitional National Government (TNG). When the TNG failed to establish adequate security or governing institutions, the Government of Kenya, under the auspices of the Intergovernmental Authority on Development (IGAD), led a subsequent peace process that concluded in October 2004 with the election of Abdullahi YUSUF Ahmed as President of a second interim government, known as the Transitional Federal Government (TFG) of the Somali Republic. The TFG included a 275-member parliamentary body, known as the Transitional Federal Parliament (TFP). President YUSUF resigned late in 2008 while United Nations-sponsored talks between the TFG and the opposition Alliance for the Re-Liberation of Somalia (ARS) were underway in Djibouti. In January 2009, following the creation of a TFG-ARS unity government, Ethiopian military forces, which had entered Somalia in December 2006 to support the TFG in the face of advances by the opposition Islamic Courts Union (ICU), withdrew from the country. The TFP was doubled in size to 550 seats with the addition of 200 ARS and 75 civil society members of parliament. The expanded parliament elected Sheikh SHARIF Sheikh Ahmed, the former ICU and ARS chairman as president in January 2009. The creation of the TFG was based on the Transitional Federal Charter (TFC), which outlined a five-year mandate leading to the establishment of a new Somali constitution and a transition to a representative government following national elections. In 2009, the TFP amended the TFC to extend TFG's mandate until 2011 and in 2011 Somali principals agreed to institute political transition by August 2012. The transition process ended in September 2012 when clan elders replaced the TFP by appointing 275 members to a new parliament who subsequently elected a new president.

Eastern Africa, bordering the Gulf of Aden and the Indian Ocean, east of Ethiopia

principally desert; northeast monsoon (December to February), moderate temperatures in north and hot in south; southwest monsoon (May to October), torrid in the north and hot in the south, irregular rainfall, hot and humid periods (tangambili) between monsoons

mostly flat to undulating plateau rising to hills in north

party to: Biodiversity, Desertification, Endangered Species, Law of the Sea, Ozone Layer Protection
signed, but not ratified: none of the selected agreements

Sunni Muslim (Islam) (official, according to the Transitional Federal Charter)

10,428,043
note: this estimate was derived from an official census taken in 1975 by the Somali Government; population counting in Somalia is complicated by the large number of nomads and by refugee movements in response to famine and clan warfare (July 2014 est.)   evolution and prospects (1950-2100) 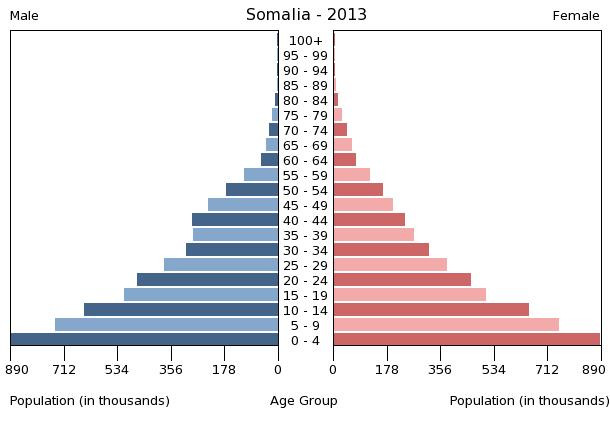 in the process of building a federal parliamentary republic

highest court(s): the provisional constitution stipulates the establishment of the Constitutional Court (consists of 5 judges including the chief judge and deputy chief judge)
note - under the terms of the 2004 Transitional National Charter (TNC), a Supreme Court based in Mogadishu and an Appeal Court were established; yet most regions have reverted to local forms of conflict resolution, either secular, traditional Somali customary law, or sharia Islamic law
judge selection and term of office: judges appointed by the president upon proposal of the Judicial Service Commission, a 9-member judicial and administrative body; judge tenure NA
subordinate courts: federal- and federal member state-level courts; military courts; sharia (Islamic) courts

other: numerous clan and sub-clan factions exist both in support and in opposition to the transitional government

Somalia does not have an embassy in the US (ceased operations on 8 May 1991); note - the Somali Government is represented in the US through its Permanent Mission to the UN

light blue with a large white five-pointed star in the center; the blue field was originally influenced by the flag of the UN, but today is said to denote the sky and the neighboring Indian Ocean; the five points of the star represent the five regions in the horn of Africa that are inhabited by Somali people: the former British Somaliland and Italian Somaliland (which together make up Somalia), Djibouti, Ogaden (Ethiopia), and the North East Province (Kenya)

regional and local governing bodies continue to exist and control various areas of the country, including the self-declared Republic of Somaliland in northwestern Somalia and the semi-autonomous state of Puntland in northeastern Somalia

Despite the lack of effective national governance, Somalia maintains an informal economy largely based on livestock, remittance/money transfer companies, and telecommunications. Agriculture is the most important sector with livestock normally accounting for about 40% of GDP and more than 50% of export earnings. Nomads and semi-pastoralists, who are dependent upon livestock for their livelihood, make up a large portion of the population. Livestock, hides, fish, charcoal, and bananas are Somalia's principal exports, while sugar, sorghum, corn, qat, and machined goods are the principal imports. Somalia's small industrial sector, based on the processing of agricultural products, has largely been looted and the machinery sold as scrap metal. Telecommunication firms provide wireless services in most major cities and offer the lowest international call rates on the continent. Mogadishu's main market offers a variety of goods from food to electronic gadgets. Hotels continue to operate and are supported with private-security militias. Somalia's government lacks the ability to collect domestic revenue, and arrears to the IMF have continued to grow. Somalia's capital city - Mogadishu - has witnessed the development of the city's first gas stations, supermarkets, and flights between Europe (Istanbul-Mogadishu) since the collapse of central authority in 1991. This economic growth has yet to expand outside of Mogadishu, and within the city, security concerns dominate business. In the absence of a formal banking sector, money transfer/remittance services have sprouted throughout the country, handling up to $1.6 billion in remittances annually, although international concerns over the money transfers into Somalia currently threatens these services.

general assessment: the public telecommunications system was almost completely destroyed or dismantled during the civil war; private companies offer limited local fixed-line service and private wireless companies offer service in most major cities while charging the lowest international rates on the continent
domestic: local cellular telephone systems have been established in Mogadishu and in several other population centers with one company beginning to provide 3G services in late 2012
international: country code - 252; Mogadishu is a landing point for the EASSy fiber-optic submarine cable system linking East Africa with Europe and North America (2010)

despite a dramatic drop in the number of attacks in 2012, the International Maritime Bureau continues to report the territorial and offshore waters in the Gulf of Aden and Indian Ocean as a region of significant risk for piracy and armed robbery against ships accounting for 25% of all attacks in 2012; 75 vessels, including commercial shipping and pleasure craft, were attacked or hijacked both at anchor and while underway compared with 237 in 2011; the number of hijackings off the coast of Somalia was reduced to 14 in 2012, down from 28 in 2011; as of April 2013, 77 vessels and 7 hostages were being held for ransom by Somali pirates; the presence of several naval task forces in the Gulf of Aden and additional anti-piracy measures on the part of ship operators, including the use of on-board armed security teams, have reduced piracy incidents in that body of water; in response Somali-based pirates, using hijacked fishing trawlers as "mother ships" to extend their range, shifted operations as far south as the Mozambique Channel, eastward to the vicinity of the Maldives, and northeastward to the Strait of Hormuz

Ethiopian forces invaded southern Somalia and routed Islamist Courts from Mogadishu in January 2007; "Somaliland" secessionists provide port facilities in Berbera to landlocked Ethiopia and have established commercial ties with other regional states; "Puntland" and "Somaliland" "governments" seek international support in their secessionist aspirations and overlapping border claims; the undemarcated former British administrative line has little meaning as a political separation to rival clans within Ethiopia's Ogaden and southern Somalia's Oromo region; Kenya works hard to prevent the clan and militia fighting in Somalia from spreading south across the border, which has long been open to nomadic pastoralists

These are the 50 largest cities of Somalia ordered based on their number of inhabitants.