Discovered in 1493 by Christopher COLUMBUS who named it for his brother Bartolomeo, Saint Barthelemy was first settled by the French in 1648. In 1784, the French sold the island to Sweden, who renamed the largest town Gustavia, after the Swedish King GUSTAV III, and made it a free port; the island prospered as a trade and supply center during the colonial wars of the 18th century. France repurchased the island in 1877 and took control the following year. It was placed under the administration of Guadeloupe. Saint Barthelemy retained its free port status along with various Swedish appellations such as Swedish street and town names, and the three-crown symbol on the coat of arms. In 2003 the populace of the island voted to secede from Guadeloupe, and in 2007 the island became a French overseas collectivity.

Caribbean, island between the Caribbean Sea and the North Atlantic Ocean; located in the Leeward Islands (northern) group; Saint Barthelemy lies east of the US Virgin Islands

less than an eighth of the size of Washington, DC

tropical, with practically no variation in temperature; has two seasons (dry and humid)

has few natural resources, its beaches being the most important

with no natural rivers or streams, fresh water is in short supply, especially in summer, and provided by desalinization of sea water, collection of rain water, or imported via water tanker 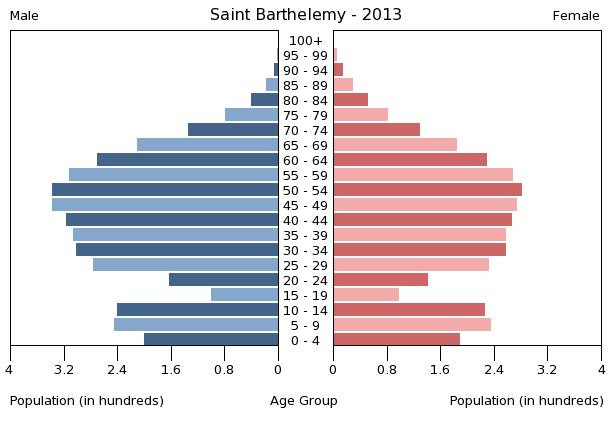 chief of state: President Francois HOLLANDE (since 15 May 2012), represented by Prefect Philippe CHOPIN (since 16 November 2011)
head of government: President of the Territorial Council Bruno MAGRAS (since 16 July 2007)
cabinet: Executive Council; note - there is also an advisory, economic, social, and cultural council
elections: French president elected by popular vote for a five-year term; prefect appointed by the French president on the advice of the French Ministry of Interior; president of the Territorial Council elected by the members of the Council for a five-year term; election last held on 16 July 2007 (next to be held in 2012)
election results: Bruno MAGRAS unanimously elected president by the Territorial Council

the flag of France is used

The economy of Saint Barthelemy is based upon high-end tourism and duty-free luxury commerce, serving visitors primarily from North America. The luxury hotels and villas host 70,000 visitors each year with another 130,000 arriving by boat. The relative isolation and high cost of living inhibits mass tourism. The construction and public sectors also enjoy significant investment in support of tourism. With limited fresh water resources, all food must be imported, as must all energy resources and most manufactured goods. Employment is strong and attracts labor from Brazil and Portugal.

defense is the responsibility of France

These are the 50 largest cities of Saint Barthelemy ordered based on their number of inhabitants.