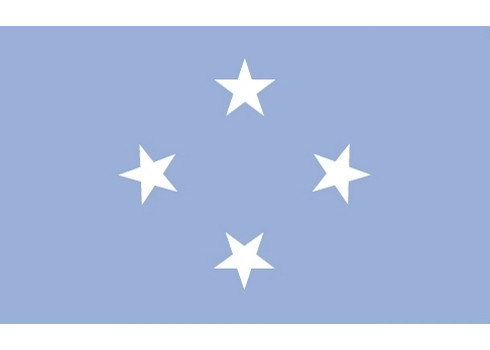 James Hansen Newman is an American physicist and a former NASA astronaut who flew on four Space Shuttle missions.

Tosiwo Nakayama was the first President of the Federated States of Micronesia. He served two terms from 1979 until 1987.

Leo Amy Falcam is a Micronesian political figure. He was born in Pohnpei. He served as the first elected Governor of Pohnpei from 1979 to 1983 and as Vice President of Micronesia from May 1997 to May 1999. He then served as the fifth president of the Federated States of Micronesia from May 11, 1999 to May 11, 2003. In March 2003 he lost his parliamentary seat during elections, denying him a chance at a second term.

Alik L. Alik is a diplomat and politician from Federated States of Micronesia who has been the Vice President of the Federated States of Micronesia since 2007. Born in Kosrae, Alik completed high school in 1973 and then left the island for education in the United States, attending United States International University in Hawaii from 1973 to 1976 and then Graceland College in Iowa from 1976 to 1979. After returning to Kosrae Alik, worked as a student counselor at the Kosrae High School for two years. In 1982 he became a Foreign Service Officer for the FSM Department of External Affairs and promoted to Deputy Chief for the Division of South Pacific Affairs. In 1989 Alik became first Micronesian ambassador to Fiji and served until 1998. While in Fiji he was also a cross-accredited as FSM’s Ambassador to: Israel, Tonga, Nauru, Kiribati, Samoa, Tuvalu, Solomon Islands and Vanuatu. In 1998 he was appointed ambassador to Japan. His political career began in 2003, when he won Kosrae State’s at-large representative to the 13th FSM Congress in which he held chairmanship for the Committee on Resource and Development with membership on the Committees of Judiciary & Governmental Operations and also External Affairs. In 14th congress he assumed chairmanship of the Foreign Affairs Committee.

Debra Daniel is a Micronesian swimmer. She competed for Micronesia at the 2012 Summer Olympics and ranked at 56. Daniel did not advance to the semifinals.

Michael Jones McKean is an American artist. He is known primarily for his large-scale installations and sculptures dealing with issues of narration, complexity, representation, materiality and failure.

John Richard Haglelgam was the second President of the Federated States of Micronesia. He was born on August 10, 1949 on the island of Eauripik in Yap State. He attended Eauripik Elementary School and the Outer Islands High School on Ulithi, Yap from 1964-1968. In 1968, he received an AFS scholarship to spend his senior year at Beaverton High School in Beaverton, Oregon. After graduating from Beaverton High School in 1969, Mr. Haglelgam enrolled at the University of Hawaii where he received a Bachelor of Arts degree in Political Science in 1973. He attended Willamette University School of Law in Salem, Oregon for one year and returned home to run for a seat in the Congress of Micronesia House of Representatives to represent the Outer Islands of Yap. After serving a term in the House of Representatives, Haglelgam returned to the University of Hawaii at Manoa as a graduate student sponsored by the East West Center. Haglelgam was at the University of Hawaii when he was re-elected to a second term in the House of Representatives. He received a Master of Arts degree in Political Science in the spring of 1977. One year after his unsuccessful bid for reelection in 1991, Mr. Haglelgam attended Harvard Kennedy School where he received a Master degree in Public Administration in 1993.

Mihter Wendolin is a Micronesian sprinter. She competed in the 100 metres competition at the 2012 Summer Olympics; she ran the preliminaries in 13.67 seconds, which did not qualify her for Round 1.

Jacob Nena is a Micronesian political figure who served as the fourth President of the Federated States of Micronesia from 1996 to 1999. He had served as Vice President under Bailey Olter; after Olter suffered a stroke in July 1996, Nena took over as acting president on November 8 of that year and was sworn in as president on May 8, 1997, serving out the remaining two years of Olter's term. Before becoming vice president and president, Nena served as Governor of Kosrae from 1979 to 1983.

Sebastian L. Anefal is a Micronesian politician. He became the foreign minister of the Federated States of Micronesia on September 5, 2003, when his nomination was approved by the Micronesian Congress. Through foreign ministry work, he gained experiences in international politics and have addressed the United Nations general assembly on some occasions where Micronesia was concerned. Anefal also worked extensively with other world leaders to provide foreign aid to Micronesia for infrastructure projects and programs. He was the secretary of the department of resources and economic affairs prior to his appointment as foreign minister of Micronesia. He remained foreign minister of Micronesia until July 2007. On January 8, 2007, he was inaugurated as the fifth Governor of his home state of Yap and has remained in this position to date. Anefal ran unopposed for a second term in the Yapese gubernatorial election held on November 2, 2010. The combined ticket of Gov. Sebastian Anefal and Lt. Gov. Tony Tareg received 3,519 votes in the election. Anefal was sworn into his second, four-year term in office on January 10, 2011.

Masao Nakayama was a politician and diplomat of the Federated States of Micronesia. Born in Chuuk to a Japanese father and a native mother from Onoun, Nakayama was the younger brother of FSM's first president, Tosiwo Nakayama. In 1968, Nakayama was elected a member of the Truk District Legislature. In 1969, he was elected to the Congress of the Trust Territory of the Pacific Islands. After Micronesian independence, Nakayama was the Chief of International Affairs in the Foreign Affairs Department of the FSM from 1980 to 1989. From 1989 to 1997, Nakayama was the ambassador of FSM to Japan. At the same time, he was concurrently the non-resident ambassador of FSM to China, Indonesia, Malaysia, South Korea and Singapore. In 1998, Nakayama was appointed the Permanent Representative of FSM to the United Nations in New York City. Nakayama was married to Serlyn Nakayama, with seven children. He died at the age of 70 in a Nevada hospital days after a stroke.

Kerson Hadley is a Micronesian swimmer. He competed at the 2008 Summer Olympics. He finished in 70th place in a time of 25.34s. He qualified for the 2012 Summer Olympics in the Men's 50 metre freestyle where he ranked 40th. In London Olympics 2012 he won his heat in a time of 24.82s but it wasn't quick enough to qualify to the next round

Redley A. Killion is a Micronesian politician and public servant, who served two consecutive terms as the sixth Vice President of the Federated States of Micronesia from May 1999 to May 2007. Killion is from Chuuk State and was selected to Congress of Micronesia in 1987. He has a record of positions served in public service.

Hirosi Ismael became a Micronesian politician after ending his medical practice. Ismael served as the third Vice President of the Federated States of Micronesia from May 1987 until 1991. Ismael was a native of Kosrae, but he grew up in Pohnpei where he attended school. He served in a variety of top positions within the United Nations' Administration of the Trust Territory of the Pacific Islands before the FSM achieved its independence. Ismael became the third Vice President of the Federated States of Micronesia in May 1987, a position he held until 1991. He returned to his home state of Kosrae after leaving office, where he wanted to live his live farming, read his books and go to church. Only after he was requested by some local politicians did he go back into politics but only on an advisory position to the then Governor of Kosrae, afterwards he felt that he had to go back to the medical field but only to help with the administrative side was he appointed the Director of Health Dept. He also became a Reverend to his church of Utwe. He was a simple man really who loved his fried chicken and Chinese checkers. When he found that he had cancer he went to the Philippines for treatments, after realizing the treatments were taking its toll on him, he decided to go back home and spend the rest of his life with his family. His last few hours were spent with his wife, daughter and grandchildren. His wife said that "he went with a smile on his face". Dr. Hirosi Ismael was a very humble man that only wanted what was good for the people of Kosrae and FSM and he lived his life by example.