An independent kingdom for much of its long history, Korea was occupied by Japan beginning in 1905 following the Russo-Japanese War. Five years later, Japan formally annexed the entire peninsula. Following World War II, Korea was split with the northern half coming under Soviet-sponsored communist control. After failing in the Korean War (1950-53) to conquer the US-backed Republic of Korea (ROK) in the southern portion by force, North Korea (DPRK), under its founder President KIM Il Sung, adopted a policy of ostensible diplomatic and economic "self-reliance" as a check against outside influence. The DPRK demonized the US as the ultimate threat to its social system through state-funded propaganda, and molded political, economic, and military policies around the core ideological objective of eventual unification of Korea under Pyongyang's control. KIM Il Sung's son, KIM Jong Il, was officially designated as his father's successor in 1980, assuming a growing political and managerial role until the elder KIM's death in 1994. KIM Jong Un was publicly unveiled as his father's successor in September 2010. Following KIM Jong Il's death in December 2011, the regime began to take actions to transfer power to KIM Jong Un and KIM has now assumed many his father's former titles and duties. After decades of economic mismanagement and resource misallocation, the DPRK since the mid-1990s has relied heavily on international aid to feed its population. The DPRK began to ease restrictions to allow semi-private markets, starting in 2002, but then sought to roll back the scale of economic reforms in 2005 and 2009. North Korea's history of regional military provocations; proliferation of military-related items; long-range missile development; WMD programs including tests of nuclear devices in 2006, 2009, and 2013; and massive conventional armed forces are of major concern to the international community. The regime in 2013 announced a new policy calling for the simultaneous development of the North's nuclear weapons program and its economy.

Eastern Asia, northern half of the Korean Peninsula bordering the Korea Bay and the Sea of Japan, between China and South Korea

temperate with rainfall concentrated in summer

racially homogeneous; there is a small Chinese community and a few ethnic Japanese 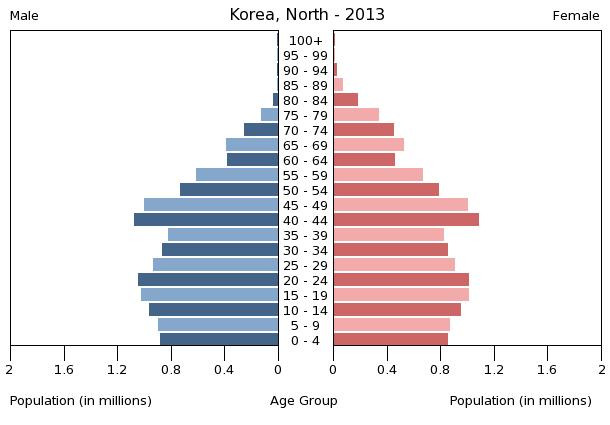 Founding of the Democratic People's Republic of Korea (DPRK), 9 September (1948)

unicameral Supreme People's Assembly or Ch'oego Inmin Hoeui (687 seats; members elected by popular vote to serve five-year terms)
elections: last held on 9 March 2014 (next to be held in March 2019)
election results: percent of vote by party - NA; seats by party - NA; ruling party approves a list of candidates who are elected without opposition; a token number of seats are reserved for minor parties

none; North Korea has a Permanent Mission to the UN in New York

none; note - Swedish Embassy in Pyongyang represents the US as consular protecting power

three horizontal bands of blue (top), red (triple width), and blue; the red band is edged in white; on the hoist side of the red band is a white disk with a red five-pointed star; the broad red band symbolizes revolutionary traditions; the narrow white bands stands for purity, strength, and dignity; the blue bands signify sovereignty, peace, and friendship; the red star represents socialism

North Korea, one of the world's most centrally directed and least open economies, faces chronic economic problems. Industrial capital stock is nearly beyond repair as a result of years of underinvestment, shortages of spare parts, and poor maintenance. Large-scale military spending draws off resources needed for investment and civilian consumption. Industrial and power output have stagnated for years at a fraction of pre-1990 levels. Frequent weather-related crop failures aggravated chronic food shortages caused by on-going systemic problems, including a lack of arable land, collective farming practices, poor soil quality, insufficient fertilization, and persistent shortages of tractors and fuel. Large-scale international food aid deliveries have allowed the people of North Korea to escape widespread starvation since famine threatened in 1995, but the population continues to suffer from prolonged malnutrition and poor living conditions. Since 2002, the government has allowed private "farmers' markets" to begin selling a wider range of goods. It also permitted some private farming - on an experimental basis - in an effort to boost agricultural output. In December 2009, North Korea carried out a redenomination of its currency, capping the amount of North Korean won that could be exchanged for the new notes, and limiting the exchange to a one-week window. A concurrent crackdown on markets and foreign currency use yielded severe shortages and inflation, forcing Pyongyang to ease the restrictions by February 2010. In response to the sinking of the South Korean warship Cheonan and the shelling of Yeonpyeong Island, South Korea's government cut off most aid, trade, and bilateral cooperation activities, with the exception of operations at the Kaesong Industrial Complex. In preparation for the 100th anniversary of KIM Il-sung's birthday in 2012, North Korea continued efforts to develop special economic zones with China and expressed willingness to permit construction of a trilateral gas pipeline that would carry Russian natural gas to South Korea. The North Korean government often highlights its goal of becoming a "strong and prosperous" nation and attracting foreign investment, a key factor for improving the overall standard of living. In this regard, in 2013 the regime rolled out 14 new Special Economic Zones set up for foreign investors, though the initiative remains in its infancy. Nevertheless, firm political control remains the government's overriding concern, which likely will inhibit changes to North Korea's current economic system.

$40 billion (2012 est.)
$40 billion (2011 est.)
$40 billion (2010 est.)
note: data are in 2012 US dollars;
North Korea does not publish reliable National Income Accounts data; the data shown here are derived from purchasing power parity (PPP) GDP estimates for North Korea that were made by Angus MADDISON in a study conducted for the OECD; his figure for 1999 was extrapolated to 2011 using estimated real growth rates for North Korea's GDP and an inflation factor based on the US GDP deflator; the results were rounded to the nearest $10 billion.

no independent media; radios and TVs are pre-tuned to government stations; 4 government-owned TV stations; the Korean Workers' Party owns and operates the Korean Central Broadcasting Station, and the state-run Voice of Korea operates an external broadcast service; the government prohibits listening to and jams foreign broadcasts (2008)

current situation: North Korea is a source country for men, women, and children who are subjected to forced labor, forced marriage, and sex trafficking; in the recent past, many North Korean women and girls lured by promises of food, jobs, and freedom migrated to China illegally to escape poor social and economic conditions only to be forced into prostitution, marriage, or exploitative labor arrangements; North Koreans do not have a choice in the work the government assigns them and are not free to change jobs at will; many North Korean workers recruited to work abroad under bilateral contracts with foreign governments are subjected to forced labor and reportedly face government reprisals if they try to escape or complain to outsiders; thousands of North Koreans, including children, are subjected to forced labor in prison camps
tier rating: Tier 3 - North Korea does not fully comply with minimum standards for the elimination of trafficking and is not making significant efforts to do so; the government has conducted no known investigations, prosecutions, or convictions of trafficking offenders or officials complicit in forced labor or forced prostitution; the government also has reported no efforts to identify or assist trafficking victims and continues to deny human trafficking is a problem; authorities provide no discernible protection services to trafficking victims and does not permit NGOs to assist victims (2013)

for years, from the 1970s into the 2000s, citizens of the Democratic People's Republic of (North) Korea (DPRK), many of them diplomatic employees of the government, were apprehended abroad while trafficking in narcotics, including two in Turkey in December 2004; police investigations in Taiwan and Japan in recent years have linked North Korea to large illicit shipments of heroin and methamphetamine, including an attempt by the North Korean merchant ship Pong Su to deliver 150 kg of heroin to Australia in April 2003

These are the 50 largest cities of Korea, North ordered based on their number of inhabitants.