Founding president and liberation struggle icon Jomo KENYATTA led Kenya from independence in 1963 until his death in 1978, when President Daniel MOI took power in a constitutional succession. The country was a de facto one-party state from 1969 until 1982 when the ruling Kenya African National Union (KANU) made itself the sole legal party in Kenya. MOI acceded to internal and external pressure for political liberalization in late 1991. The ethnically fractured opposition failed to dislodge KANU from power in elections in 1992 and 1997, which were marred by violence and fraud, but were viewed as having generally reflected the will of the Kenyan people. President MOI stepped down in December 2002 following fair and peaceful elections. Mwai KIBAKI, running as the candidate of the multiethnic, united opposition group, the National Rainbow Coalition (NARC), defeated KANU candidate Uhuru KENYATTA and assumed the presidency following a campaign centered on an anticorruption platform. KIBAKI's NARC coalition splintered in 2005 over a constitutional review process. Government defectors joined with KANU to form a new opposition coalition, the Orange Democratic Movement (ODM), which defeated the government's draft constitution in a popular referendum in November 2005. KIBAKI's reelection in December 2007 brought charges of vote rigging from ODM candidate Raila ODINGA and unleashed two months of violence in which as many as 1,500 people died. African Union-sponsored mediation led by former UN Secretary General Kofi ANNAN in late February 2008 resulted in a power-sharing accord bringing ODINGA into the government in the restored position of prime minister. The power sharing accord included a broad reform agenda, the centerpiece of which was constitutional reform. In August 2010, Kenyans overwhelmingly adopted a new constitution in a national referendum. The new constitution introduced additional checks and balances to executive power and significant devolution of power and resources to 47 newly created counties. It also eliminated the position of prime minister following the first presidential election under the new constitution, which occurred on 4 March 2013. Uhuru KENYATTA, the son of founding president Jomo KENYATTA, won the March elections in the first round by a close margin and was sworn into office on 9 April 2013.

Eastern Africa, bordering the Indian Ocean, between Somalia and Tanzania

varies from tropical along coast to arid in interior

the Kenyan Highlands comprise one of the most successful agricultural production regions in Africa; glaciers are found on Mount Kenya, Africa's second highest peak; unique physiography supports abundant and varied wildlife of scientific and economic value

45,010,056
note: estimates for this country explicitly take into account the effects of excess mortality due to AIDS; this can result in lower life expectancy, higher infant mortality, higher death rates, lower population growth rates, and changes in the distribution of population by age and sex than would otherwise be expected (July 2014 est.)   evolution and prospects (1950-2100) 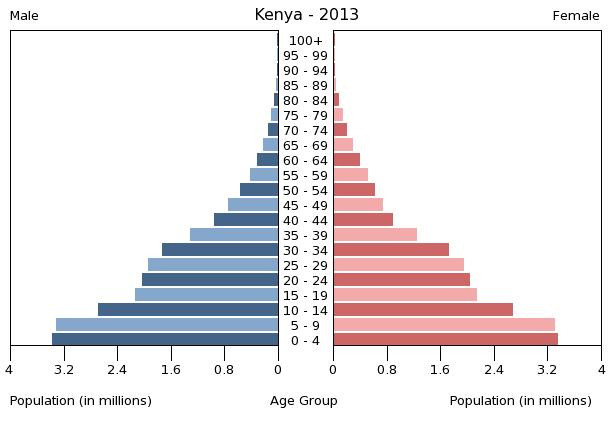 chief of state: President Uhuru KENYATTA (since 9 April 2013); Deputy President William RUTO (since 9 April 2013); note - the president is both chief of state and head of government
head of government: President Uhuru KENYATTA (since 9 April 2013); Deputy President William RUTO (since 9 April 2013); note - according to the 2008 power sharing agreement the position of prime minister was created though not well defined; consistent with the new constitution, the position was abolished after the March 2013 elections
cabinet: Cabinet appointed by the president
elections: president and deputy president elected on the same ticket by popular vote for a five-year term (eligible for a second term); in addition to receiving a simple majority of votes, the presidential candidate must also win 25% or more of the votes cast in each of more than half of the 47 counties to avoid a runoff; election last held on 4 March 2013 (next to be held in 2017 or 2018); note - the new constitution had set elections for August 2011 but elections were delayed to 2013
election results: President Uhuru KENYATTA elected in first round; percent of vote - Uhuru KENYATTA 50.1%, Raila ODINGA 43.7%, Musalia MUDAVADI 4.0%, other 2.2%

three equal horizontal bands of black (top), red, and green; the red band is edged in white; a large Maasai warrior's shield covering crossed spears is superimposed at the center; black symbolizes the majority population, red the blood shed in the struggle for freedom, green stands for natural wealth, and white for peace; the shield and crossed spears symbolize the defense of freedom

Kenya hKenya has been hampered by corruption and by reliance upon several primary goods whose prices have remained low. Low infrastructure investment threatens Kenya's long-term position as the largest East African economy, although the Kenyatta administration has prioritized infrastructure development. International financial lenders and donors remain important to Kenya's economic growth and development. Unemployment is high at around 40%. The country has chronic budget deficits. Inflationary pressures and sharp currency depreciation peaked in early 2012 but have since abated following low global food and fuel prices and monetary interventions by the Central Bank. Recent terrorism in Kenya and the surrounding region threatens Kenya's important tourism industry. Kenya, in conjunction with neighboring Ethiopia and Sudan country facts" data-cl-code="SDS">South Sudan, intends to begin construction on a transport corridor and oil pipeline into the port of Lamu in 2014.

none specifically, the only significant inland waterway in the country is the part of Lake Victoria within the boundaries of Kenya; Kisumu is the main port and has ferry connections to Uganda and Tanzania (2011)

18-26 years of age for male and female voluntary service (under 18 with parental consent), with a 9-year obligation (7 years for Kenyan Navy); applicants must be Kenyan citizens and provide a national identity card (obtained at age 18) and a school-leaving certificate; women serve under the same terms and conditions as men; mandatory retirement at age 55 (2012)

Kenya served as an important mediator in brokering Sudan's north-south separation in February 2005; Kenya provides shelter to an estimated 550 million refugees, including Ugandans who flee across the border periodically to seek protection from Lord's Resistance Army rebels; Kenya works hard to prevent the clan and militia fighting in Somalia from spreading across the border, which has long been open to nomadic pastoralists; the boundary that separates Kenya's and Sudan's sovereignty is unclear in the "Ilemi Triangle," which Kenya has administered since colonial times

refugees (country of origin): 425,879 (Somalia); 84,045 (Sudan country facts" data-cl-code="SDS">South Sudan); 29,723 (Ethiopia); 15,290 (Democratic Republic of Congo - includes registered asylum seekers); 8,769 (Sudan - includes registered asylum seekers); 5,825 (Burundi - includes registered asylum seekers) (2014)
IDPs: 412,000 (represents people displaced since the 1990s by ethnic and political violence and land disputes and who sought refuge mostly in camps; persons who took refuge in host communities or were evicted in urban areas are not included in the data; data is not available on pastoralists displaced by cattle rustling, violence, natural disasters, and development projects; the largest displacement resulted from 2007-08 post-election violence (2013)
stateless persons: 20,000 (2012); note - the stateless population is composed of Nubians, Kenyan Somalis, and coastal Arabs; the Nubians are descendants of Sudanese soldiers recruited by the British to fight for them in East Africa more than a century ago; they did not receive Kenyan citizenship when the country became independent in 1963; only recently have Nubians become a formally recognized tribe and had less trouble obtaining national IDs; Galjeel and other Somalis who have lived in Kenya for decades are lumped in with more recent Somali refugees and denied ID cards

current situation: Kenya is a source, transit, and destination country for adults and children subjected to forced labor and sex trafficking; Kenyan children are forced to work in domestic service, agriculture, fishing, cattle herding, street vending, begging, and prostitution; Kenyan economic migrants to other East African countries, Sudan country facts" data-cl-code="SDS">South Sudan, Europe, the US, and the Middle East are at times exploited in domestic servitude, massage parlors or brothels, or forced manual labor; children from Burundi, Ethiopia, Somalia, South Sudan, Tanzania, and Uganda are subjected to forced labor and prostitution in Kenya; Somali refugees living in the Dadaab complex may be forced into prostitution or work on tobacco farms
tier rating: Tier 2 Watch List - Kenya does not fully comply with the minimum standards for the elimination of trafficking; the government enacted the Counter-Trafficking in Persons Act in October 2012 but has not launched and implemented its national plan of action, convened the Counter-Trafficking in Persons Advisory Committee, taken tangible action against trafficking complicity among law enforcement officials, provided shelter and other protective services for adult victims, monitor the work of overseas labor recruitment agencies, or provide wide-scale anti-trafficking training to its officials; efforts to assist and care for child victims remain strong; corruption among officials continue to hamper efforts to bring traffickers to justice (2013)

These are the 50 largest cities of Kenya ordered based on their number of inhabitants.