Guernsey and the other Channel Islands represent the last remnants of the medieval Dukedom of Normandy, which held sway in both France and England. The islands were the only British soil occupied by German troops in World War II. Guernsey is a British crown dependency but is not part of the UK or of the European Union. However, the UK Government is constitutionally responsible for its defense and international representation.

Western Europe, islands in the English Channel, northwest of France

about one-half the size of Washington, DC

temperate with mild winters and cool summers; about 50% of days are overcast 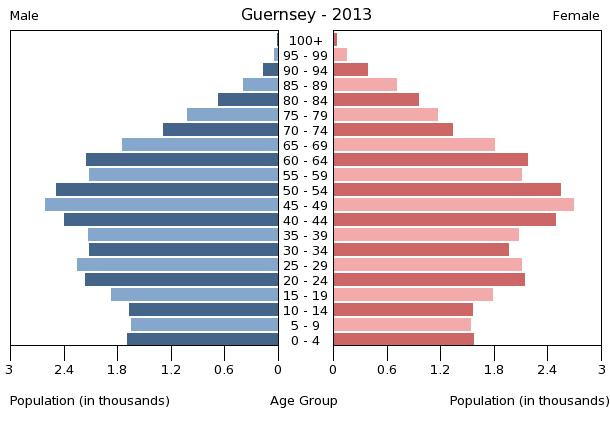 customary legal system based on Norman customary law, and includes elements of the French Civil Code and English common law

unicameral States of Deliberation (45 seats; members elected by popular vote to serve four-year terms; note - there are also 10 Douzaine representatives - one from each parish, 2 representatives from Alderney and the appointed attorney general and soliciter general); note - Alderney and Sark have parliaments
elections: last held on 18 April 2012 (next to be held in 2016)
election results: percent of vote - NA; seats - all independents

highest court(s): Guernsey Court of Appeal (consists of the Bailiff of Guernsey, who is the ex-officio president of the Guernsey Court of Appeal, and at least 12 judges); Royal Court (organized into 3 divisions - Full Court sits with 1 judge and 7 to 12 jurats acting as judges of fact, Ordinary Court sits with 1 judge and normally 3 jurats, and Matrimonial Causes Division sits with a 1 judge and 4 jurats); note - appeals beyond Guernsey courts are heard by the Judicial Committee of the Privy Council (in London)
judge selection and term of office: Royal Court Balliff, Deputy Balliff and Court of Appeal justices appointed by the British Crown and hold office at Her Majesty's pleasure; jurats elected by the States of Election, a body chaired by the Balliff and a number of jurats
subordinate courts: Court of Alderney; Court of the Seneschal of Sark; Magistrate's Court (includes Juvenile Court); Contracts Court; Ecclesiastical Court; Court of Chief Pleas

white with the red cross of Saint George (patron saint of England) extending to the edges of the flag and a yellow equal-armed cross of William the Conqueror superimposed on the Saint George cross; the red cross represents the old ties with England and the fact that Guernsey is a British Crown dependency; the gold cross is a replica of the one used by Duke William of Normandy at the Battle of Hastings

Financial services - banking, fund management, insurance - account for about 23% of employment and about 55% of total income in this tiny, prosperous Channel Island economy. Tourism, manufacturing, and horticulture, mainly tomatoes and cut flowers, have been declining. Financial services, construction, retail, and the public sector have been growing. Light tax and death duties make Guernsey a popular tax haven. In January 2013, Guernsey signed a tax agreement with Jersey and the Isle of Man, in order to enable the islands' authorities to end tax avoidance and evasion. The evolving economic integration of the EU nations is changing the environment under which Guernsey operates.

multiple UK terrestrial TV broadcasts are received via a transmitter in Jersey with relays in Jersey, Guernsey, and Alderney; satellite packages are available; BBC Radio Guernsey and 1 other radio station operating (2009)

defense is the responsibility of the UK

These are the 50 largest cities of Guernsey ordered based on their number of inhabitants.