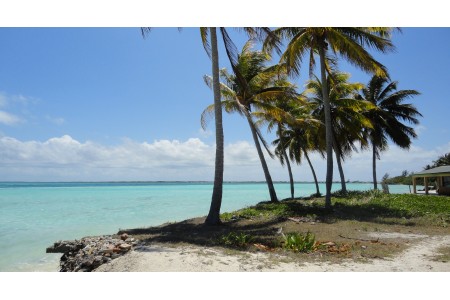 The native Amerindian population of Cuba began to decline after the European discovery of the island by Christopher COLUMBUS in 1492 and following its development as a Spanish colony during the next several centuries. Large numbers of African slaves were imported to work the coffee and sugar plantations, and Havana became the launching point for the annual treasure fleets bound for Spain from Mexico and Peru. Spanish rule eventually provoked an independence movement and occasional rebellions that were harshly suppressed. US intervention during the Spanish-American War in 1898 assisted the Cubans in overthrowing Spanish rule. Subsequently, the 1901 Platt Amendment to the Cuban constitution authorized the US to intevene in Cuba in the event of instability. The Treaty of Paris established Cuban independence from the US in 1902 after which the island experienced a string of governments mostly dominated by the military and corrupt politicians. Fidel CASTRO led a rebel army to victory in 1959; his iron rule held the subsequent regime together for nearly five decades. He stepped down as president in February 2008 in favor of his younger brother Raul CASTRO. Cuba's communist revolution, with Soviet support, was exported throughout Latin America and Africa during the 1960s, 1970s, and 1980s. The country faced a severe economic downturn in 1990 following the withdrawal of former Soviet subsidies worth $4-6 billion annually. Cuba at times portrays the US embargo, in place since 1961, as the source if its difficulties. Illicit migration to the US - using homemade rafts, alien smugglers, air flights, or via the US's southwest border - is a continuing problem. The US Coast Guard interdicted 1,357 Cuban nationals attempting to cross the Straits of Florida in 2013. Also in 2013, 14,251 Cuban migrants presented themselves at various land border ports of entry through out the US.

total: 29 km
border countries: US Naval Base at Guantanamo Bay 29 km
note: Guantanamo Naval Base is leased by the US and remains part of Cuba

mostly flat to rolling plains, with rugged hills and mountains in the southeast

the east coast is subject to hurricanes from August to November (in general, the country averages about one hurricane every other year); droughts are common

largest country in Caribbean and westernmost island of the Greater Antilles 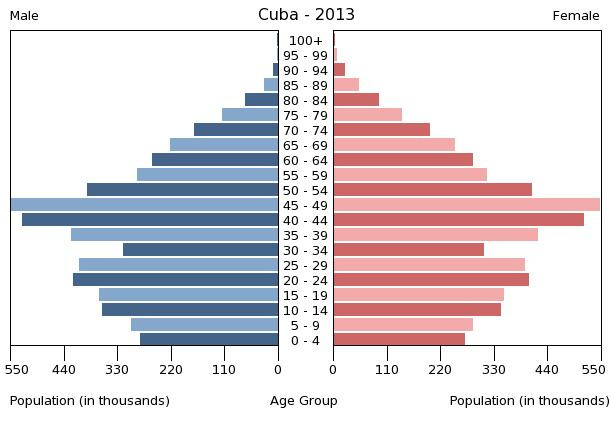 illicit emigration is a continuing problem; Cubans attempt to depart the island and enter the US using homemade rafts, alien smugglers, direct flights, or falsified visas; Cubans also use non-maritime routes to enter the US including direct flights to Miami and over-land via the southwest border

unicameral National Assembly of People's Power or Asamblea Nacional del Poder Popular (number of seats in the National Assembly is based on population and currently exceeds 600; members elected directly from slates approved by special candidacy commissions to serve five-year terms)
elections: last held on 3 February 2013 (next to be held in 2018)
election results: Cuba's Communist Party is the only legal party, and officially sanctioned candidates run unopposed

five equal horizontal bands of blue (top, center, and bottom) alternating with white; a red equilateral triangle based on the hoist side bears a white, five-pointed star in the center; the blue bands refer to the three old divisions of the island: central, occidental, and oriental; the white bands describe the purity of the independence ideal; the triangle symbolizes liberty, equality, and fraternity, while the red color stands for the blood shed in the independence struggle; the white star, called La Estrella Solitaria (the Lone Star) lights the way to freedom and was taken from the flag of Texas
note: design similar to the Puerto Rican flag, with the colors of the bands and triangle reversed

name: "La Bayamesa" (The Bayamo Song)
lyrics/music: Pedro FIGUEREDO
note: adopted 1940; Pedro FIGUEREDO first performed "La Bayamesa" in 1868 during the Ten Years War against the Spanish; a leading figure in the uprising, FIGUEREDO was captured in 1870 and executed by a firing squad; just prior to the fusillade he is reputed to have shouted, "Morir por la Patria es vivir" (To die for the country is to live), a line from the anthem

The government continues to balance the need for loosening its socialist economic system against a desire for firm political control. The government in April 2011 held the first Cuban Communist Party Congress in almost 13 years, during which leaders approved a plan for wide-ranging economic changes. Since then, the Cuban government has slowly and incrementally implemented limited economic reforms, including allowing Cubans to buy electronic appliances and cell phones, stay in hotels, and buy and sell used cars. The Cuban government also opened up some retail services to "self-employment," leading to the rise of so-called "cuentapropistas" or entrepreneurs. Recent moves include permitting the private ownership and sale of real estate and new vehicles, allowing private farmers to sell agricultural goods directly to hotels, and expanding categories of self-employment. Despite these reforms, the average Cuban's standard of living remains at a lower level than before the collapse of the Soviet Union and the resulting downturn of the 1990s. Since late 2000, Venezuela has been providing oil on preferential terms, and it currently supplies over 100,000 barrels per day of petroleum products. Cuba has been paying for the oil, in part, with the services of Cuban personnel in Venezuela, including some 30,000 medical professionals.

general assessment: greater investment beginning in 1994 and the establishment of a new Ministry of Information Technology and Communications in 2000 has resulted in improvements in the system; national fiber-optic system under development; 95% of switches digitized by end of 2006; mobile-cellular telephone service is expensive and must be paid in convertible pesos; cell phones in Cuba number around 2 million; state communications started service of email to cell phones through nauta.cu accounts; Cuban Government has opened Internet cafes around the island, which are expensive and offer slow-speed connections
domestic: fixed-line density remains low at 10 per 100 inhabitants; mobile-cellular service expanding but remains only about 10 per 100 persons
international: country code - 53; the ALBA-1 fiber-optic submarine cable links Cuba, Jamaica, and Venezuela; fiber-optic cable laid to but not linked to US network; satellite earth station - 1 Intersputnik (Atlantic Ocean region) (2010)

1.606 million
note: private citizens are prohibited from buying computers or accessing the Internet without special authorization; foreigners may access the Internet in large hotels but are subject to firewalls; some Cubans buy illegal passwords on the black market or take advantage of public outlets to access limited email and the government-controlled "intranet" (2009)

the collapse of the Soviet Union deprived the Cuban military of its major economic and logistic support and had a significant impact on the state of Cuban equipment; the army remains well trained and professional in nature; the lack of replacement parts for its existing equipment has increasingly affected operational capabilities (2013)

current situation: Cuba is a source country for adults and children subjected to forced labor and sex trafficking; child prostitution and child sex tourism reportedly occurs in Cuba, and laws do not appear to penalize the prostitution of children between the ages of 16 and 18; allegations have been made of Cubans being subjected to forced labor, particularly with Cuban work missions abroad; the scope of trafficking within Cuba is particularly difficult to gauge due to the closed nature of the government and sparse non-governmental or independent reporting
tier rating: Tier 3 - Cuba does not fully comply with the minimum standards for the elimination of trafficking and is not making significant efforts to do so; the government has not publicized information about government measures to address human trafficking through prosecution, protection, or prevention efforts but did share information about its general approach to protection for children and youth; the government has a network of shelters for victims of domestic violence and child abuse but has not verified if trafficking victims receive care in those centers (2013)

territorial waters and air space serve as transshipment zone for US- and European-bound drugs; established the death penalty for certain drug-related crimes in 1999 (2008)

These are the 50 largest cities of Cuba ordered based on their number of inhabitants.