Images from Congo, Democratic Republic of the 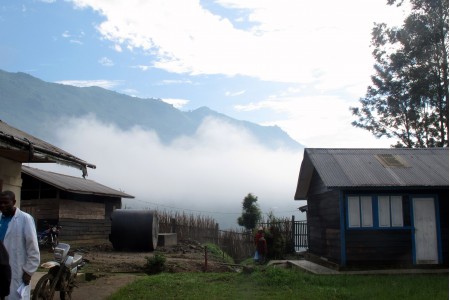 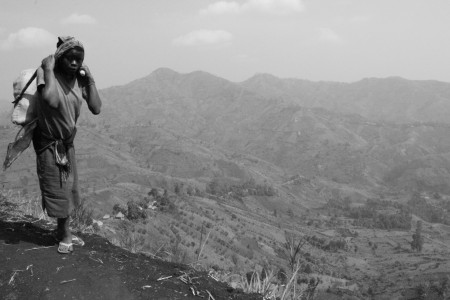 Established as a Belgian colony in 1908, the then-Republic of the Congo gained its independence in 1960, but its early years were marred by political and social instability. Col. Joseph MOBUTU seized power and declared himself president in a November 1965 coup. He subsequently changed his name - to MOBUTU Sese Seko - as well as that of the country - to Zaire. MOBUTU retained his position for 32 years through several sham elections, as well as through brutal force. Ethnic strife and civil war, touched off by a massive inflow of refugees in 1994 from fighting in Rwanda and Burundi, led in May 1997 to the toppling of the MOBUTU regime by a rebellion backed by Rwanda and Uganda and fronted by Laurent KABILA. He renamed the country the Democratic Republic of the Congo (DRC), but in August 1998 his regime was itself challenged by a second insurrection again backed by Rwanda and Uganda. Troops from Angola, Chad, Namibia, Sudan, and Zimbabwe intervened to support KABILA's regime. In January 2001, KABILA was assassinated and his son, Joseph KABILA, was named head of state. In October 2002, the new president was successful in negotiating the withdrawal of Rwandan forces occupying the eastern DRC; two months later, the Pretoria Accord was signed by all remaining warring parties to end the fighting and establish a government of national unity. A transitional government was set up in July 2003; it held a successful constitutional referendum in December 2005 and elections for the presidency, National Assembly, and provincial legislatures took place in 2006. In 2009, following a resurgence of conflict in the eastern DRC, the government signed a peace agreement with the National Congress for the Defense of the People (CNDP), a primarily Tutsi rebel group. An attempt to integrate CNDP members into the Congolese military failed, prompting their defection in 2012 and the formation of the M23 armed group - named after the 23 March 2009 peace agreements. Renewed conflict has lead to the displacement of large numbers of people and significant human rights abuses. As of February 2013, peace talks between the Congolese government and the M23 were on-going. In addition, the DRC continues to experience violence committed by other armed groups including the Democratic Forces for the Liberation of Rwanda and Mai Mai groups. In the most recent national elections, held in November 2011, disputed results allowed Joseph KABILA to be reelected to the presidency.

slightly less than one-fourth the size of the US

vast central basin is a low-lying plateau; mountains in east

periodic droughts in south; Congo River floods (seasonal); active volcanoes in the east along the Great Rift Valley
volcanism: Nyiragongo (elev. 3,470 m), which erupted in 2002 and is experiencing ongoing activity, poses a major threat to the city of Goma, home to a quarter million people; the volcano produces unusually fast-moving lava, known to travel up to 100 km /hr; Nyiragongo has been deemed a Decade Volcano by the International Association of Volcanology and Chemistry of the Earth's Interior, worthy of study due to its explosive history and close proximity to human populations; its neighbor, Nyamuragira, which erupted in 2010, is Africa's most active volcano; Visoke is the only other historically active volcano

second largest country in Africa (after Algeria) and largest country in Sub-Saharan Africa; straddles the equator; has narrow strip of land that controls the lower Congo River and is only outlet to South Atlantic Ocean; dense tropical rain forest in central river basin and eastern highlands

over 200 African ethnic groups of which the majority are Bantu; the four largest tribes - Mongo, Luba, Kongo (all Bantu), and the Mangbetu-Azande (Hamitic) make up about 45% of the population

77,433,744
note: estimates for this country explicitly take into account the effects of excess mortality due to AIDS; this can result in lower life expectancy, higher infant mortality, higher death rates, lower population growth rates, and changes in the distribution of population by age and sex than would otherwise be expected (July 2014 est.)   evolution and prospects (1950-2100) 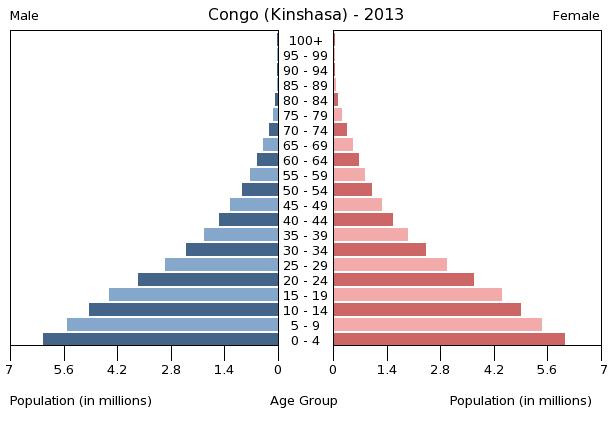 10 provinces (provinces, singular - province) and 1 city* (ville); Bandundu, Bas-Congo (Lower Congo), Equateur, Kasai-Occidental (West Kasai), Kasai-Oriental (East Kasai), Katanga, Kinshasa*, Maniema, Nord-Kivu (North Kivu), Orientale, Sud-Kivu (South Kivu)
note: according to the Constitution adopted in December 2005, the current administrative divisions were to be subdivided into 26 new provinces by 2009 but this has yet to be implemented

18 years of age; universal and compulsory

chief of state: President Joseph KABILA (since 17 January 2001)
head of government: Prime Minister Augustin MATATA PONYO Mapon (since 18 April 2012)
cabinet: Ministers of State appointed by the president
elections: under the new constitution, the president elected by popular vote for a five-year term (eligible for a second term); election last held on 28 November 2011 (next to be held in November 2016); prime minister appointed by the president
election results: Joseph KABILA reelected president; percent of vote - Joseph KABILA 49%, Etienne TSHISEKEDI 32.3%, other 18.7%; note - election marred by serious voting irregularities
note: Joseph KABILA succeeded his father, Laurent Desire KABILA, following the latter's assassination in January 2001; negotiations with rebel leaders led to the establishment of a transitional government in July 2003 with free elections held on 30 July 2006 and a run-off on 29 October 2006 confirming Joseph KABILA as president

FARDC (Forces Armées de la République Démocratique du Congo) - Army of the Democratic Republic of the Congo, which commits atrocities on citizens
FDLR (Forces Democratiques de Liberation du Rwanda) - Rwandan militia group made up of some of the perpetrators of Rwanda's Genocide in 1994
CNDP (National Congress for the Defense of the People) - mainly Congolese Tutsis who want refugees returned and more representation in government
M23 - rebel group comprised largely from ex-CNDP forces

sky blue field divided diagonally from the lower hoist corner to upper fly corner by a red stripe bordered by two narrow yellow stripes; a yellow, five-pointed star appears in the upper hoist corner; blue represents peace and hope, red the blood of the country's martyrs, and yellow the country's wealth and prosperity; the star symbolizes unity and the brilliant future for the country

name: "Debout Congolaise" (Arise Congolese)
lyrics/music: Joseph LUTUMBA/Simon-Pierre BOKA di Mpasi Londi
note: adopted 1960; the anthem was replaced during the period in which the country was known as Zaire, but was readopted in 1997

The economy of the Democratic Republic of the Congo - a nation endowed with vast natural resource wealth - is slowly recovering after decades of decline. Systemic corruption since independence in 1960, combined with country-wide instability and conflict that began in the mid-90s has dramatically reduced national output and government revenue and increased external debt. With the installation of a transitional government in 2003 after peace accords, economic conditions slowly began to improve as the transitional government reopened relations with international financial institutions and international donors, and President KABILA began implementing reforms. Progress has been slow to reach the interior of the country although clear changes are evident in Kinshasa and Lubumbashi. An uncertain legal framework, corruption, and a lack of transparency in government policy are long-term problems for the mining sector and for the economy as a whole. Much economic activity still occurs in the informal sector and is not reflected in GDP data. Renewed activity in the mining sector, the source of most export income, has boosted Kinshasa's fiscal position and GDP growth in recent years. The global recession cut economic growth in 2009 to less than half its 2008 level, but growth returned to around 7% per year in 2010-12. The DRC signed a Poverty Reduction and Growth Facility with the IMF in 2009 and received $12 billion in multilateral and bilateral debt relief in 2010, but the IMF at the end of 2012 suspended the last three payments under the loan facility - worth $240 million - because of concerns about the lack of transparency in mining contracts. In 2012, the DRC updated its business laws by adhering to OHADA, the Organization for the Harmonization of Business Law in Africa. The country marked its tenth consecutive year of positive economic expansion in 2012.

heads of the Great Lakes states and UN pledged in 2004 to abate tribal, rebel, and militia fighting in the region, including northeast Congo, where the UN Organization Mission in the Democratic Republic of the Congo (MONUC), organized in 1999, maintains over 16,500 uniformed peacekeepers; members of Uganda's Lords Resistance Army forces continue to seek refuge in Congo's Garamba National Park as peace talks with the Uganda government evolve; the location of the boundary in the broad Congo River with the Republic of the Congo is indefinite except in the Pool Malebo/Stanley Pool area; Uganda and DRC dispute Rukwanzi Island in Lake Albert and other areas on the Semliki River with hydrocarbon potential; boundary commission continues discussions over Congolese-administered triangle of land on the right bank of the Lunkinda River claimed by Zambia near the DRC village of Pweto; DRC accuses Angola of shifting monuments

current situation: Democratic Republic of the Congo is a source, destination, and possibly a transit country for men, women, and children subjected to forced labor and sex trafficking; the majority of this trafficking is internal, and much of it is perpetrated by armed groups and government forces outside government control within the country's unstable eastern provinces; Congolese women and children have been exploited internally as domestic servants, while others migrate to Angola, South Africa, Republic of the Congo, and Sudan country facts" data-cl-code="SDS">South Sudan, as well as East African, Middle Eastern, and European nations where they are subjected to forced prostitution, domestic servitude, and forced labor in agriculture and diamond mines; indigenous and foreign armed groups (including the Lord's Resistance Army) abduct and forcibly recruit Congolese adults and children to serve as laborers, porters, domestics, combatants, and sex slaves; some commanders of the Congolese national army also recruit, at times through force, men and children for use as combatants, escorts, and porters
tier rating: Tier 3 - The Democratic Republic of the Congo does not fully comply with the minimum standards for the elimination of trafficking and is not making significant efforts to do so; the government signed a UN-backed action plan to end the recruitment and use of child soldiers within its armed forces but has not applied legal sanctions against those who recruit and use child soldiers and has not reported any law enforcement efforts to combat any other forms of trafficking; besides child soldiers, the government has not reported identifying any other victims of forced labor or sex trafficking or providing protective services or referrals to NGO-operated care facilities; NGOs continue to provide the vast majority of the limited shelter, legal, medical, and psychological services available to victims (2013)

one of Africa's biggest producers of cannabis, but mostly for domestic consumption; traffickers exploit lax shipping controls to transit pseudoephedrine through the capital; while rampant corruption and inadequate supervision leaves the banking system vulnerable to money laundering, the lack of a well-developed financial system limits the country's utility as a money-laundering center (2008)

Largest cities of Congo, Democratic Republic of the

These are the 50 largest cities of Congo, Democratic Republic of the ordered based on their number of inhabitants.