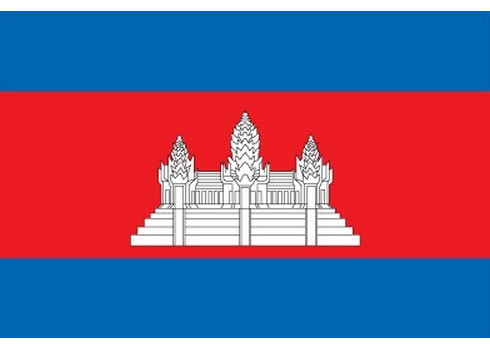 Here is a list of top tourist attractions in Cambodia. Only the topmost tourist destinations are presented here. To see other destinations, please check the images from Cambodia section.

Curious if any of these place from Cambodia made it our best tourist attractions in the world list? Read the aformentioned article in order to find out.

Angkor Wat is a Hindu temple complex in Cambodia and the largest religious monument in the world. The temple was built by the Khmer King Suryavarman II in the early 12th century in Yasodharapura, the capital of the Khmer Empire, as his state temple and eventual mausoleum. Breaking from the Shaivism tradition of previous kings, Angkor Wat was instead dedicated to Vishnu. As the best-preserved temple at the site, it is the only one to have remained a significant religious center since its foundation – Buddhist. The temple is at the top of the high classical style of Khmer architecture. It has become a symbol of Cambodia, appearing on its national flag, and it is the country's prime attraction for visitors. Angkor Wat combines two basic plans of Khmer temple architecture: the temple mountain and the later galleried temple, based on early Dravidian Architecture, with key features such as the Jagati. It is designed to represent Mount Meru, home of the devas in Hindu mythology: within a moat and an outer wall 3.6 kilometres long are three rectangular galleries, each raised above the next. At the centre of the temple stands a quincunx of towers. Unlike most Angkorian temples, Angkor Wat is oriented to the west; scholars are divided as to the significance of this. The temple is admired for the grandeur and harmony of the architecture, its extensive bas-reliefs, and for the numerous devatas adorning its walls.

The Tuol Sleng Genocide Museum is a museum in Phnom Penh, the capital of Cambodia. The site is a former high school which was used as the notorious Security Prison 21 by the Khmer Rouge regime from its rise to power in 1975 to its fall in 1979. Tuol Sleng means "Hill of the Poisonous Trees" or "Strychnine Hill". Tuol Sleng was only one of at least 150 execution centers in the country, and as many as 20,000 prisoners there were killed.

Preah Vihear Temple is an ancient Hindu temple built during the reign of Khmer Empire, that is situated atop a 525-metre cliff in the Dângrêk Mountains, in the Preah Vihear province, Cambodia. In 1962, following a lengthy dispute between Thailand and Cambodia over ownership, the International Court of Justice in The Hague awarded the temple to Cambodia. Affording a view for many kilometers across a plain, Prasat Preah Vihear has the most spectacular setting of all the temples built during the six-centuries-long Khmer Empire. As a key edifice of the empire's spiritual life, it was supported and modified by successive kings and so bears elements of several architectural styles. Preah Vihear is unusual among Khmer temples in being constructed along a long north-south axis, rather than having the conventional rectangular plan with orientation toward the east. The temple gives its name to Cambodia's Preah Vihear province, in which it is now located, as well as the Khao Phra Wihan National Park which borders it in Thailand's Sisaket province and through which the temple is most easily accessible. On July 7, 2008, Preah Vihear was listed as a UNESCO World Heritage Site.

Banteay Srei or Banteay Srey is a 10th century Cambodian temple dedicated to the Hindu god Shiva. Located in the area of Angkor in Cambodia. It lies near the hill of Phnom Dei, 25 km north-east of the main group of temples that once belonged to the medieval capitals of Yasodharapura and Angkor Thom. Banteay Srei is built largely of red sandstone, a medium that lends itself to the elaborate decorative wall carvings which are still observable today. The buildings themselves are miniature in scale, unusually so when measured by the standards of Angkorian construction. These factors have made the temple extremely popular with tourists, and have led to its being widely praised as a "precious gem", or the "jewel of Khmer art."

The Royal Palace, in Phnom Penh, Cambodia, is a complex of buildings which serves as the royal residence of the king of Cambodia. Its full name in the Khmer language is Preah Barum Reachea Veang Chaktomuk Serei Mongkol. The Kings of Cambodia have occupied it since it was built in 1860's, with a period of absence when the country came into turmoil during and after the reign of the Khmer Rouge. The palace was constructed after King Norodom relocated the royal capital from Oudong to Phnom Penh in the mid-19th century. It was gradually built atop an old citadel called Banteay Kev. It faces towards the East and is situated at the Western bank of the cross division of the Tonle Sap River and the Mekong River called Chaktomuk.

Choeung Ek, the site of a former orchard and mass grave of victims of the Khmer Rouge - killed between 1975 and 1979 - about 17 km south of Phnom Penh, Cambodia, is the best-known of the sites known as The Killing Fields, where the Khmer Rouge regime executed over one million people between 1975 and 1979. Mass graves containing 8,895 bodies were discovered at Choeung Ek after the fall of the Khmer Rouge regime. Many of the dead were former political prisoners who were kept by the Khmer Rouge in their Tuol Sleng detention center. Today, Choeung Ek is a memorial, marked by a Buddhist stupa. The stupa has acrylic glass sides and is filled with more than 5,000 human skulls. Some of the lower levels are opened during the day so that the skulls can be seen directly. Many have been shattered or smashed in. Tourists are encouraged by the Cambodian government to visit Choeung Ek. Apart from the stupa, there are pits from which the bodies were exhumed. Human bones still litter the site. On May 3, 2005, the Municipality of Phnom Penh announced that they had entered into a 30-year agreement with JC Royal Co. to develop the memorial at Choeung Ek. As part of the agreement, they are not to disturb the remains still present in the field.

Wat Phnom is a Buddhist temple located in Phnom Penh, Cambodia. It was built in 1373, and stands 27 metres above the ground. It is the tallest religious structure in the city. The pagoda was given the name of Wat Preah Chedey Borapaut.

The Silver Pagoda is located on the south side of the Royal Palace, Phnom Penh. Formerly, it was known as Wat Ubosoth Ratanaram. The temple's official name is Preah Vihear Preah Keo Morakot but is commonly referred to as Wat Preah Keo in Khmer. The vihara houses many national treasures such as gold and jeweled Buddha statues. Most notable is a small 17th century baccarat crystal Buddha and a life-sized gold Maitreya Buddha decorated with 9584 diamonds, the largest of which weighs 25 carats. It was created in the palace workshops during 1906 and 1907, the gold Buddha weighs in at 90kg and is dressed in royal regalia commissioned by King Sisowath. During King Norodom Sihanouk's pre-Khmer Rouge reign, the Silver Pagoda was inlaid with more than 5,000 silver tiles and some of its outer facade was remodelled with Italian marble. However only a small area of these tiles are available to be viewed by the public on entering the pagoda. It is a notable wat in Phnom Penh and the official temple of the King of Cambodia.

Botum Sakor National Park is a national park of Cambodia. Situated on the coast of the Gulf of Thailand, Botum Sakor is a peninsula projecting southwest from the Cardamom Mountains. The National Park comprises 183,408 hectares of designated park land and spans three districts of Koh Kong Province: Kiri Sakor, Botum Sakor and Koh Kong. The park is under the administration of the Cambodian Ministry of Environment.