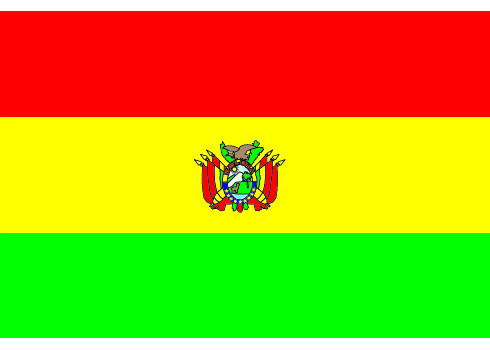 Here is a list of top tourist attractions in Bolivia. Only the topmost tourist destinations are presented here. To see other destinations, please check the images from Bolivia section.

Curious if any of these place from Bolivia made it our best tourist attractions in the world list? Read the aformentioned article in order to find out.

Salar de Uyuni is the world's largest salt flat at 10,582 square kilometers. It is located in the Potosí and Oruro departments in southwest Bolivia, near the crest of the Andes and is at an elevation of 3,656 meters above mean sea level. The Salar was formed as a result of transformations between several prehistoric lakes. It is covered by a few meters of salt crust, which has an extraordinary flatness with the average altitude variations within one meter over the entire area of the Salar. The crust serves as a source of salt and covers a pool of brine, which is exceptionally rich in lithium. It contains 50 to 70% of the world's lithium reserves, which is in the process of being extracted. The large area, clear skies, and the exceptional flatness of the surface make the Salar an ideal object for calibrating the altimeters of Earth observation satellites. The Salar serves as the major transport route across the Bolivian Altiplano and is a major breeding ground for several species of pink flamingos. Salar de Uyuni is also a climatological transitional zone since the towering tropical cumulus congestus and cumulus incus clouds that form in the eastern part of the salt flat during the summer cannot permeate beyond its drier western edges, near the Chilean border and the Atacama Desert.

Tiwanaku is a Pre-Columbian archaeological site in western Bolivia, South America. It is the capital of an empire that extended into present-day Peru and Chile, flourishing from AD 300 to AD 1000. Tiwanaku is recognized by Andean scholars as one of the most important civilizations prior to the Inca Empire; it was the ritual and administrative capital of a major state power for approximately five hundred years. The ruins of the ancient city state are near the south-eastern shore of Lake Titicaca in the La Paz Department, Ingavi Province, Tiwanaku Municipality, about 72 km west of La Paz. The site was first recorded in written history by Spanish conquistador Pedro Cieza de León. He came upon the remains of Tiwanaku in 1549 while searching for the Inca capital Qullasuyu. Some have hypothesized that Tiwanaku's modern name is related to the Aymara term taypiqala, meaning "stone in the center", alluding to the belief that it lay at the center of the world. The name by which Tiwanaku was known to its inhabitants may have been lost as they had no written language.

San Pedro prison or El penal de San Pedro is the largest prison in La Paz, Bolivia renowned for being a society within itself. Significantly different from most correctional facilities, inmates at San Pedro have jobs inside the community, buy or rent their accommodation, and often live with their families. The sale of cocaine base to visiting tourists gives those inside a significant income and an unusual amount of freedom within the prison walls. Elected leaders enforce the laws of the community, with stabbings being commonplace. The prison is home to approximately 1,500 inmates, with additional guests staying in the prison hotel. The book Marching Powder, written by Rusty Young and published in 2003, describes the experiences of the British inmate Thomas McFadden who became known for offering prison tours to tourists. The prison remains open to this day.

Valle de la Luna is situated about 10 kilometers from downtown La Paz, in the Pedro Domingo Murillo Province, La Paz Department, Bolivia. It is composed of an area where erosion has worn away the majority of a mountain. Due to being composed of clay rather than rock, over the centuries the elements have created a somewhat odd work of art here, like a desert filled with stalagmites. It is similar to another zone of La Paz that is known as el Valle de las Animas. It is an important site of the famous holiday, Dias de los Muertos The mountains surrounding La Paz are composed of clay. It is interesting to note that the mineral content of the mountains varies greatly between individual mountains. As a result, the sides of the mountains are different colors, creating very striking optical illusions. A majority of them are a clear beige or light brown color. There are also areas that are almost red, with sections of dark violet.

The Plaza Murillo is the central plaza of the city of La Paz and the open space most connected to the political life of Bolivia. Prominent buildings on the plaza include the Presidential Palace, National Congress of Bolivia, and the Cathedral of La Paz. It is located in the old town, or Casco Viejo, of the city and is surrounded by Socabaya Street to the west, Ayacucho Street to the east, Comercio Street to the south, and a continuation of Ingavi and Ballivan Streets to the north.

The Muela del Diablo, or 'Devil's Tooth,' is an iconic feature of the La Paz landscape in Bolivia.

The Coca Museum covers the history of the coca plant from the Andean region and related drug cocaine. It is associated with the International Coca Research Institute in La Paz, the capital of Bolivia. A travelling version of the museum is available.