Unemployment refers to the portion of a countryâ€™s population that is not working despite those people being available for work actively searching for employment in their country. The world has been ravaged by high unemployment in the world over the past several years. Many attribute the problems of unemployment to the economic crisis that began in 2007 and was felt throughout all the continents in the world, in particular North America, Europe and Africa but did not exclude the continents of Asia and Oceania. However, while the economic crisis of 2007 definitely deserves some of the blame for the unemployment problems that many people in the world have experienced over the past six years it is not the main reason for the unemployment crisis that is found throughout the world. The extreme unemployment that has imprisoned most of the countries in Europe, the United States and almost all of the countries in Africa can be attributed to a disconnect between the education being provided young people and the needs of the marketplace. 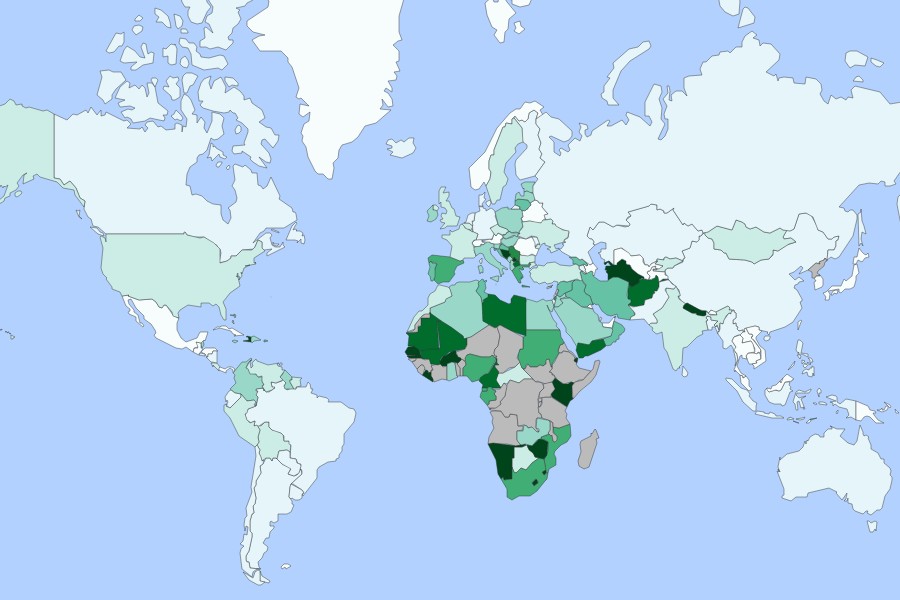 Some of the possible causes for the world unemployment include:

As seen on the world unemployment map, the unemployment rates for young workers between the ages of 15 and 24 in the United States, Europe and Africa are staggering. Unemployment was approximately 15 percent for this age group in the United States, 23 percent in Europe and almost 30 percent in Africa. It is very likely that the young people in the continents of Asia and Oceania are also experiencing difficulty finding consistent employment but the unemployment figures provided are questionable because they do not include rural workers when calculating the employment figures.

Throughout the world the common angst of young workers is that they are unable to find work because of the increased use of machines to perform labor intensive jobs combined with seasonal work stoppages.

The high unemployment rate found in countries throughout the world is a result of educational facilities found in these countries not teaching the skills needed to service the needs of companies. One can travel throughout the world and you will find that there are large number of educated people of all ages who are out of work. Individuals with university and college degrees who have been taught impressive theories but not provided practical training. The number one complaint from companies large and small throughout the world is that they do not have enough skilled employees, in particular skilled blue collar workers.

The educational and political leaders found in countries in Europe, North America, Africa, Asia and Oceania have not been effective in their promotion of the learning of vocational skills and now a situation has developed where there are too many white collar professionals and not enough white collar jobs while blue collar skilled workers such as millwrights and pipe fitters are in demand throughout the world.

For example, when you look at a country comparison in terms of unemployment between the country of South Africa and that of Germany there is a massive difference in the number of people who are unemployed. In South Africa the unemployment rate is between 30 to 40 percent while in Germany the unemployment rate is between 5 and 7.5 percent. This is due to the fact that in South Africa there is a mindset that actually looks down on people who perform the work of skilled trades because their education system has focused on teaching educational theories and been almost dismissive in the teaching of vocational trades. In contrast, Germany has a proud history of providing skilled blue collar workers and considers this a very important job.

In Germany there are numerous vocational educational teaching facilities for people of all ages but the same situation does not exist in South Africa, Kenya and other countries throughout the continent of Africa the number of vocational educational facilities are few and far between. This despite the fact that most countries in Africa have huge unemployment concerns as over 70 million young people between the ages of 15 and 24 are looking for work. However, the disconnect between the educational facilities and the marketplace is not limited to the continent of Africa.

The unemployment rate in the United States is between 10 and 15 percent and the leader of the United States, President Barack Obama, has been trying to convince the unemployed citizens of the country to retrain themselves for the new economy which in many situations requires learning a trade that is in demand. The United States is in dire need of skilled blue collar workers and this situation is the same throughout the world. Our society has been unwilling to accept the fact that there are only so many white collar jobs available and that companies need skilled employees to fill other positions in the workforce. This same problem exists throughout countries in Europe such as Slovakia, in Asia in countries such as China and throughout the continent of Oceania in countries such as Australia and New Zealand. The disconnect between what jobs needed to be filled in the world and the academic and vocational training that is being provided in countries is a huge problem and is a major reason for the unemployment crisis that is occurring in many countries throughout the world.

In most countries there is a disconnect between the educational facilities and the needs of the marketplace. Germany has one of the lowest unemployment rates in the world and they are a country that is arguably one of the best at providing a sufficient amount of learning institutions that provide training for both white collar and blue collar work.

High unemployment rates are caused by a decrease in consumer demand

High unemployment rates in a country are a result of a decrease in gross domestic product (GDP). When there is a lack of demand for the products of a company that business must then make the decision to terminate the employment of some of their workers. If the marketplace does not want the products of a company than the business cannot justify the presence of workers at their business because they are not selling enough product to pay the salaries of the employees.

Businesses react to a reduced demand for goods by laying off workers and this results in the unemployment of workers. If an individual is unemployed they will look for work first within their borders but if they cannot find work in their own countries they will look beyond their home borders.

Migration of workers as a result of unemployment

The migration of workers from their home countries in a search for work has become a major issue over the past several years.

Countries such as France, Italy and Spain have been beset by migrant workers from the continent of Africa as people from countries such as Algeria have taken dangerous boating trips to find work. During the 2007 economic recession in Europe many citizens from countries such as Ireland and the United Kingdom found their way to North America to look for work. The migration of workers will always occur when they are faced with a situation of high unemployment in their home countries. The problem to their home countries is that many of the people who leave are young people and they constitute a brain and labor drain because instead of contributing to the economies of their home countries they are now going to be helping produce goods and innovation to a new country.

Another reason why workers, particularly young unemployed workers leave their home countries is because the death rate of older workers has improved. Quite frankly, people are living longer and in the process working longer as well. This fact leads to there being fewer job opportunities for new workers to enter the workforce and thus they are forced to look elsewhere to find work.

The unemployment problems faced throughout the world are numerous but in many respects can be traced to one common trend: a disconnect between the educational facilities and the marketplace. The leaders of our societies, both academic and political have not done enough to guide the world population in understanding that one must have a skill that is in demand and they must be willing to adapt to the changing economy by learning new skills. If there are no jobs for an individual who has a history degree but there are jobs available for a skilled tradesperson than it is in the best interest of that individual to learn a trade so that they can become employed. It is the countries that are able to educate their populace to fill the needs of the marketplace that will have low unemployment and high gross domestic product and in the process become the most prosperous and financially dominant countries in the world.