In 1816, the United Provinces of the Rio Plata declared their independence from Spain. After Bolivia, Paraguay, and Uruguay went their separate ways, the area that remained became Argentina. The country's population and culture were heavily shaped by immigrants from throughout Europe, with Italy and Spain providing the largest percentage of newcomers from 1860 to 1930. Up until about the mid-20th century, much of Argentina's history was dominated by periods of internal political conflict between Federalists and Unitarians and between civilian and military factions. After World War II, an era of Peronist populism and direct and indirect military interference in subsequent governments was followed by a military junta that took power in 1976. Democracy returned in 1983 after a failed bid to seize the Falkland Islands (Islas Malvinas) by force, and has persisted despite numerous challenges, the most formidable of which was a severe economic crisis in 2001-02 that led to violent public protests and the successive resignations of several presidents. In January 2013, Argentina assumed a nonpermanent seat on the UN Security Council for the 2013-14 term.

rich plains of the Pampas in northern half, flat to rolling plateau of Patagonia in south, rugged Andes along western border

San Miguel de Tucuman and Mendoza areas in the Andes subject to earthquakes; pamperos are violent windstorms that can strike the pampas and northeast; heavy flooding in some areas
volcanism: volcanic activity in the Andes Mountains along the Chilean border; Copahue (elev. 2,997 m) last erupted in 2000; other historically active volcanoes include Llullaillaco, Maipo, Planchon-Peteroa, San Jose, Tromen, Tupungatito, and Viedma

second-largest country in South America (after Brazil); strategic location relative to sea lanes between the South Atlantic and the South Pacific Oceans (Strait of Magellan, Beagle Channel, Drake Passage); diverse geophysical landscapes range from tropical climates in the north to tundra in the far south; Cerro Aconcagua is the Western Hemisphere's tallest mountain, while Laguna del Carbon is the lowest point in the Western Hemisphere

Argentina's population continues to grow but at a slower rate because of its steadily declining birth rate. Argentina's fertility decline began earlier than in the rest of Latin America, occurring most rapidly between the early 20th century and the 1950s and then becoming more gradual. Life expectancy has been improving, most notably among the young and the poor. While the population under age 15 is shrinking, the youth cohort - ages 15-24 - is the largest in Argentina's history and will continue to bolster the working-age population. If this large working-age population is well-educated and gainfully employed, Argentina is likely to experience an economic boost and possibly higher per capita savings and investment. Although literacy and primary school enrollment are nearly universal, grade repetition is problematic and secondary school completion is low. Both of these issues vary widely by region and socioeconomic group.
Argentina has been primarily a country of immigration for most of its history, welcoming European immigrants after its independence in the 19th century and attracting especially large numbers from Spain and Italy. European immigration diminished in the 1950s, when Argentina's military dictatorships tightened immigration rules and European economies rebounded. Regional migration, however, continued to supply low-skilled workers and today it accounts for three-quarters of Argentina's immigrant population. The first waves of highly skilled Argentine emigrant workers headed mainly to the United States and Spain in the 1960s and 1970s. The ongoing European economic crisis is driving the return migration of some Argentinean and other Latin American nationals, as well as the immigration of Europeans to South America, where Argentina is a key recipient. 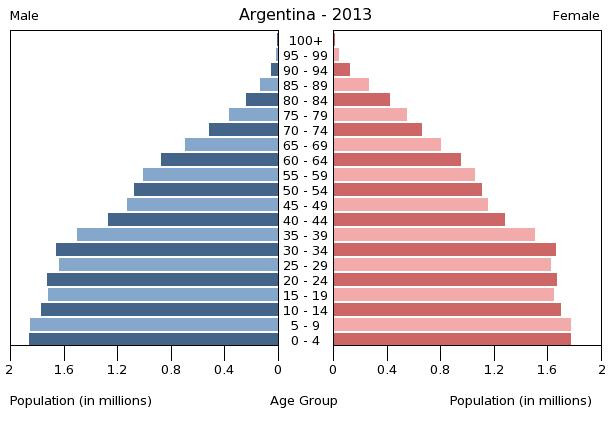 civil law system based on West European legal systems; note - as of January 2013, Congress was deliberating a government-backed reform to the civil code

three equal horizontal bands of light blue (top), white, and light blue; centered in the white band is a radiant yellow sun with a human face known as the Sun of May; the colors represent the clear skies and snow of the Andes; the sun symbol commemorates the appearance of the sun through cloudy skies on 25 May 1810 during the first mass demonstration in favor of independence; the sun features are those of Inti, the Inca god of the sun

Sun of May (a sun-with-face symbol)

Argentina benefits from rich natural resources, a highly literate population, an export-oriented agricultural sector, and a diversified industrial base. Although one of the world's wealthiest countries 100 years ago, Argentina suffered during most of the 20th century from recurring economic crises, persistent fiscal and current account deficits, high inflation, mounting external debt, and capital flight. A severe depression, growing public and external indebtedness, and an unprecedented bank run culminated in 2001 in the most serious economic, social, and political crisis in the country's turbulent history. Interim President Adolfo RODRIGUEZ SAA declared a default - at the time the largest ever - on the government's foreign debt in December of that year, and abruptly resigned only a few days after taking office. His successor, Eduardo DUHALDE, announced an end to the peso's decade-long 1-to-1 peg to the US dollar in early 2002. The economy bottomed out that year, with real GDP 18% smaller than in 1998 and almost 60% of Argentines under the poverty line. Real GDP rebounded to grow by an average 8.5% annually over the subsequent six years, taking advantage of previously idled industrial capacity and labor, an audacious debt restructuring and reduced debt burden, excellent international financial conditions, and expansionary monetary and fiscal policies. Inflation also increased, however, during the administration of President Nestor KIRCHNER, which responded with price restraints on businesses, as well as export taxes and restraints, and beginning in 2007, with understating inflation data. Cristina FERNANDEZ DE KIRCHNER succeeded her husband as President in late 2007, and the rapid economic growth of previous years began to slow sharply the following year as government policies held back exports and the world economy fell into recession. The economy in 2010 rebounded strongly from the 2009 recession, but has slowed since late 2011 even as the government continued to rely on expansionary fiscal and monetary policies, which have kept inflation in the double digits. The government expanded state intervention in the economy throughout 2012. In May 2012 the Congress approved the nationalization of the oil company YPF from Spain's Repsol. The government expanded formal and informal measures to restrict imports during the year, including a requirement for pre-registration and pre-approval of all imports. In July 2012 the government also further tightened currency controls in an effort to bolster foreign reserves and stem capital flight. During 2013, the government continued with a mix expansionary fiscal and monetary policies and foreign exchange and imports controls to limit the drain in Central Bank foreign reserves, which nevertheless dropped US $12 billion during the year. GDP grew 3% and inflation remained steady at 25%, according to private estimates. In October 2013, the government settled long-standing international arbitral disputes (including with three US firms) dating back to before and following the 2002 Argentine financial crisis. In early 2014, the government embraced a series of more orthodox economic policies. It devalued the peso 20%, substantially tightened monetary and fiscal policies, and took measures to mend ties with the international financial community, including: engaging with the IMF to improve its economic data reporting, reaching a compensation agreement with Repsol for the expropriation of YPF, and presenting a proposal to pay its arrears to the Paris Club.

18-24 years of age for voluntary military service (18-21 requires parental consent); no conscription; if the number of volunteers fails to meet the quota of recruits for a particular year, Congress can authorize the conscription of citizens turning 18 that year for a period not exceeding one year (2012)

the Argentine military is a well-organized force constrained by the country's prolonged economic hardship; the country has recently experienced a strong recovery, and the military is implementing a modernization plan aimed at making the ground forces lighter and more responsive (2008)

Argentina continues to assert its claims to the UK-administered Falkland Islands (Islas Malvinas), South Georgia, and the South Sandwich Islands in its constitution, forcibly occupying the Falklands in 1982, but in 1995 agreed to no longer seek settlement by force; UK continues to reject Argentine requests for sovereignty talks; territorial claim in Antarctica partially overlaps UK and Chilean claims; uncontested dispute between Brazil and Uruguay over Braziliera/Brasiliera Island in the Quarai/Cuareim River leaves the tripoint with Argentina in question; in 2010, the ICJ ruled in favor of Uruguay's operation of two paper mills on the Uruguay River, which forms the border with Argentina; the two countries formed a joint pollution monitoring regime; the joint boundary commission, established by Chile and Argentina in 2001 has yet to map and demarcate the delimited boundary in the inhospitable Andean Southern Ice Field (Campo de Hielo Sur); contraband smuggling, human trafficking, and illegal narcotic trafficking are problems in the porous areas of the border with Bolivia

a transshipment country for cocaine headed for Europe, heroin headed for the US, and ephedrine and pseudoephedrine headed for Mexico; some money-laundering activity, especially in the Tri-Border Area; law enforcement corruption; a source for precursor chemicals; increasing domestic consumption of drugs in urban centers, especially cocaine base and synthetic drugs (2008)

These are the 50 largest cities of Argentina ordered based on their number of inhabitants.